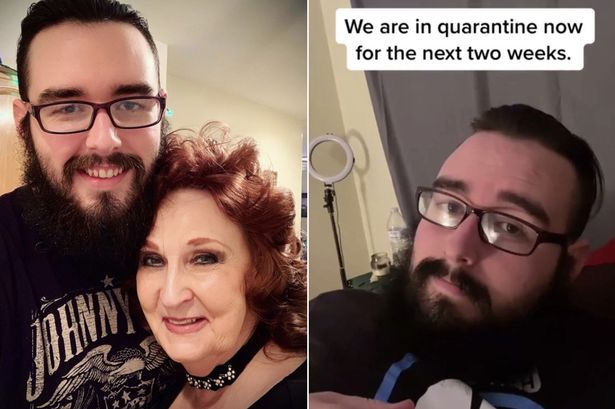 A 71-year-old grandmother who married a 17-year-old when she met him at her son’s funeral has revealed they both contracted Covid-19.

Almeda and Gary Hardwick, who are now 77 and 22 respectively, took to TikTok to tell their fans they had fallen victims of the virus but were only experiencing “mild symptoms”.

The two made the headlines when they got married in 2015 after meeting at the funeral of Almeda’s son Robert,45, who died following a seizure.

Despite the 53-year age gap, the pair instantly felt an attraction with Almeda drawn to Gary’s “lovely smile”.

“It was like a bright light through the grief,” she previously said

Gary took to TikTok to share with the couple’s fans how they both contracted the potentially deadly virus and are self-isolating.

“So the test came back positive. We do have Covid-19.

“We’re in quarantine now for the next two weeks.

“We are only experiencing mild symptoms which is a blessing.

“We both have complete loss of taste and smell, chills, body aches, fatigue and a very dry cough.

“We’re on day 3 of it currently. We love you all. Thanks for the support.”

The news is worrying considering Almeda suffered a heart attack in July.

Gary took to TikTok at the time to urge their fans to pray for his beloved as she fought for her life in hospital.

He said his bride was “high risk”.

“The three blockages she has to her heart are high risk.

“We are praying he [the doctor] inserts all three stents and she will not have to do heart surgery,” he said.

Since they married, the couple from Tennessee have shared videos of themselves on TikTok celebrating their love.

And on their fourth wedding anniversary he paid an emotional tribute to his wife.

He said: “Four years ago on this very day, I gave my heart and my soul to the woman who steals it over and over again every day.