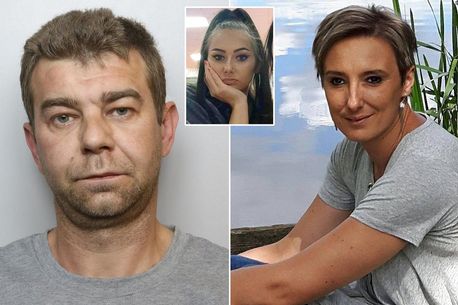 A woman murdered by her ‘alcoholic bully’ controlling husband sent a chilling final message fearing he would kill her.

Just days before he killed her along with their teen daughter, Aneta Zdun wrote to her mother: “I don’t want him to kill us, he’s a psycho.”

Tesco Marcin Zdun, 40, murdered his wife and 18-year-old daughter because he was losing control over them, a jury heard.

The supermarket worker was today found guilty at Winchester Crown Court over the deaths of Aneta and daughter Nikoleta on June 1.

The defendant had told the court he believed his both his wife and daughter had been having an affair with a man he worked with – based only on the way his colleague looked at him.

His murder trial was told his suspicions of infidelity were baseless.

Zdun was accused by the prosecution of having a “controlling nature” over his family, and flying into a jealous rage as it became clear they were slipping from his clutchse.

His murder trial was told he was a “psycho” and a “violent, alcoholic bully” who killed his family as Aneta made plans to leave him.

His wife, a care worker, and daughter were found with brutal injuries at their family home, and pronounced dead at the scene.

The pair were killed on a special day in the Polish calendar, called Children’s Day.

Neighbours told of hearing women screaming in terror at their Salisbury family home, the trial was told.

They rushed to a wire fence adjoining the home and saw Zdun stabbing at the women as they tried to flee from him on a pathway.

The neighbours watched in horror as he slashed their throats.

Workmen chased and detained Zdun as paramedics tried in vain to save the women.

He was later found with a knife as well as £940, Polish currency and his passport, his trial was told.

When he was arrested at the scene, police found a folding lock knife in his trouser pocket with bloodstains on the blade and handle, his trial heard.

The prosecution told his murder trial he did not deny the killings, but claimed to have no recollection of the incident.

Zdun had become increasingly angry at his wife and daughter as they failed to follow him as the family leader at their home, the prosecution said.

He had become convinced that the pair had become sexually involved with a man from his work simply because of the way he had looked at him, which he described as “with anger in his eyes”.

Smirking, he told the court that he believed his wife and daughter had become involved with him because they were “walking sore”.

Zdun also fell out with his daughter after she disobeyed him on getting piercings and tattoos having turned to her mother for permission instead.

And he was furious with Aneta for ‘failing’ to clean their house or make ‘proper’ meals for the family as well as for not making loan repayments for her car.

Out of revenge for this, he would confiscate her keys and even disconnect the battery so Aneta could not drive it, even to visit her care work clients.

After his wife stopped sleeping with him and moved into a spare bedroom, he put a lock on the marital bedroom door to stop her “nagging” at him.

But the trial heard how this even stopped her from getting her clothes from the wardrobe when he was out of the house.

Zdun became increasingly violent towards his wife, especially when drunk, and had even posted an apology on Facebook for his “alcoholism”, the prosecution said.

Nicholas Haggan QC, prosecuting, said that Zdun’s wife and daughter had become terrified of him, especially when he attacked his wife in the kitchen a few days before he killed her.

The defendant admitted in court that he “shook her a bit on the floor” but denied prosecution claims that he strangled her.

But the incident had been a final straw for Aneta who threatened to contact the police unless he moved out of the family home, which he agreed to do.

It was the “shame” of this ultimate loss of control of his family that peaked Zdun’s anger and tragically led to the brutal murders of his wife and daughter, the court was told.