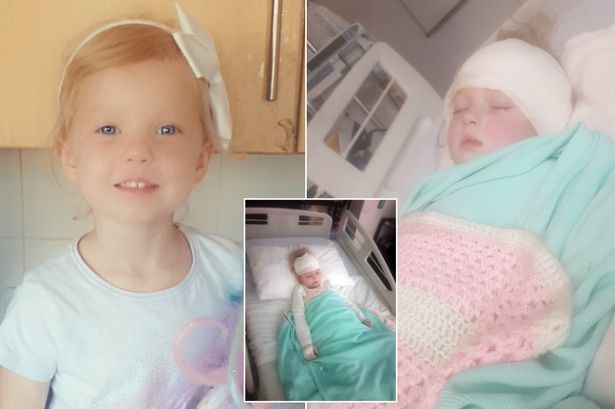 A mum has been left devastated after learning on Christmas Eve her daughter has a fast-growing cancerous brain tumour.about:blank

Payton Gilby was rushed to Sheffield Children’s Hospital for an operation to remove as much of the tumour as possible the day before Christmas.

She has now begun a course of treatment which is due to last all year, Grimsby Telegraph reported.

Although surgeons removed the tumour if the medulloblastoma comes back, Payton’s chances of survival are just 10 per cent.

Mum Vanessa Gilby, 29, described learning the devastating diagnosis, which means her daughter will need specialist treatment at a cancer hospital in Manchester for several months.

Vanessa, who is also mum to son Tyler-Jay, eight, said: “You could never imagine in a million years that your loved one won’t survive cancer.

“She is such a beautiful, kind, happy girl who does not deserve this.

“It is terrifying. If the tumour comes back there is a less than 10 per cent chance she will survive. It is awful.”

Payton, a pupil at Old Clee Primary Academy in Grimsby, had begun feeling unwell at school throughout December.

It wasn’t until she underwent an MRI scan at Diana Princess of Wales Hospital that it became clear she had a tumour and needed urgent treatment.

Vanessa said: “They had to operate straight away because it was an aggressive malignant tumour.

“We didn’t get a chance to have Christmas together because my mum and dad looked after Tyler, while I was with Payton.

“It is going to be hard for the rest of the treatment because I will be driving all over the country.”

Payton has to have a line put into a vein in her neck so she can receive medicine easily.

The treatment threatens to make her infertile, leading doctors to take ovarian tissue and freeze it in case she later wants to have children.

Payton, who loves being creative, painting and drawing and has a special love for animals, is now back at home watching TV recovering and awaiting the first treatment at Manchester in three weeks.

Vanessa’s sister Jamie-Leigh, 27, has helped drive Payton into hospital and even delivered presents on the big day.

Vanessa said: “She has been brilliant.

“She had never been on a motorway until we were driving to Sheffield.

“She brought her Christmas presents over because she was in hospital on Christmas Day.

“There was a visit from Santa and they gave her a Christmas dinner.

“But it is going to be a long haul throughout the year.

“She will be at the Manchester hospital for six weeks and then have six weeks at home.

“There will be nine-week blocks of treatment.”

A fundraising page has been set up to help pay for a wig to replace Payton’s blonde locks and for transport costs.

“Not only has this awful illness traumatised and tortured my little girl it has isolated us from out family,” the Gofundme page reads.

“My aim with the money is for me to try and give her the most normal happy life possible while having treatment, I’d love to buy her a wig when she loses her hair and pay for my son to come and visit us as many weekends as is possible.

“Payton is losing her life as she knows it, she doesn’t deserve to lose her brother too.”