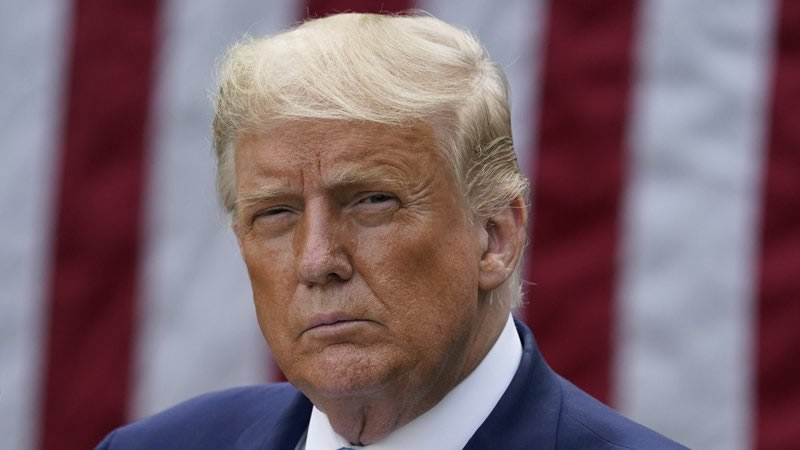 If you wanted to encapsulate Donald Trump’s entire political career in a single image, you could do no better than to show Trumpty Dumpty, throwing himself off the wall and smashing — and then reverse the film, put Trumpty back on the wall and watch him do it again, in an endless loop. That is the Trump technique, just self destruct over and over again.

Unfortunately for the GOP, when Trumpty does his routine, he also takes the GOP down onto the sidewalk with him. The Republican establishment took a major hit on Saturday night at the Save America Summit in Palm Beach, when Trump predictably went off script. He’s been pent up at Mar-a-Lago with only an occasional phone in to Newsmax or Fox News if he’s lucky, so he was primed to go off and go off he did. NBC News:

Former President Donald Trump again lashed out at Senate Minority Leader Mitch McConnell, R-Ky., calling the top Republican a “dumb son of a b—-” and a “stone cold loser” amid a lengthy rant at a Republican donor event Saturday night in which he also reiterated his false claims of electoral victory last fall.

Trump, according to a source familiar with his remarks, said “a real leader” never would have accepted the electoral results. That narrative, which Trump spun for months after losing last fall, led to the deadly Capitol riot on Jan. 6 and his second impeachment trial soon after. […]

“If that were [Senate Majority Leader Chuck] Schumer instead of this dumb son of a b—- Mitch McConnell, they would never allow it to happen,” Trump said. “They would have fought it.”

And of course he was “so disappointed” in Mike Pence for not performing a miracle and keeping him in office — I mean, what are these religious wingnuts for, if they can’t do that when you need it, right? Pence didn’t show up at this Summit. He didn’t show up at CPAC, either. Isn’t that interesting? Pence is purportedly running for president in 2024, based on all the accomplishments of the Trump administration, of which he was a part, but now he avoids Trump like the plague and Trump disparages him publicly at every opportunity. Anybody know a couples counselor who can heal this riff?

And the beatdown went on.

Trump also mocked former Transportation Secretary Elaine Chao, who resigned from his administration after the riot and is married to McConnell.”

“I hired his wife. Did he ever say thank you?” Trump said, adding sarcastically on her decision to resign after Jan. 6: “She suffered so greatly.” […]

Addressing the pandemic, the former president said he was not getting enough credit for his administration overseeing the development of the vaccines and suggested they be called the “Trumpcine.”

He repeated his longtime mockery of Dr. Anthony Fauci, director of the U.S. National Institute of Allergy and Infectious Diseases, for his errant opening pitch at a Washington Nationals game last summer and for his pandemic analysis and advice, saying Fauci is, “so full of crap.”

The Republican establishment fired back, and the biggest gun was Liz Cheney, who, gasp, openly refuted the Big Lie. Man, has she got a pair, and they’re made of brass, or maybe adamantine.

Trump is indeed at war with the constitution, a document he has never read but knows that he wouldn’t like anyway, because so far it’s been nothing but an impediment to his becoming emperor for life and a pain in the ass.

Other GOP establishment figures asked for comment cried unity, unity, but there is no unity. Not on these facts.

I think he and Mitch McConnell have a common goal,” said [John] Thune, the second-highest ranking Senate Republican. “And that is, getting the majority back in 2022 and hopefully in the end that will be the thing that unites us.”

On CNN’s “State of the Union,” Arkansas Gov. Asa Hutchinson, a Republican who Trump lambasted last week after he vetoed an anti-transgender healthcare bill, said in response to the former president’s Saturday commentary that, “anything that’s divisive is a concern and is not helpful for us fighting the battles in Washington and at the state level.”

“In some ways, it’s not a big deal, what he said,” Hutchinson added. “But, at the same time, whenever it draws attention, we don’t need that. We need unity. We need to be focused together. We have slim majorities — or slim numbers in Washington, and we have got battles to fight. So, we need to get beyond that.”

Trump will never get “beyond that” because that’s the essence of his identity. He got where he got by being a gadfly, a bombastic bumble bee, that buzzed out of the celebrity hive, went over to the political hornet’s nest and kicked it, and in the ensuing madness, got enough votes to get elected president. This is the only playbook he has and the only set of rules he knows. It won’t change, except to get worse, because that is the one constant in the Trumpverse, chaos. Look for more of the same. And look for the schism in the GOP to widen into a chasm.

Eric Trump Just Bought a $3.2 Million Florida Home Near a Golf Club He Knows Will Let Him In