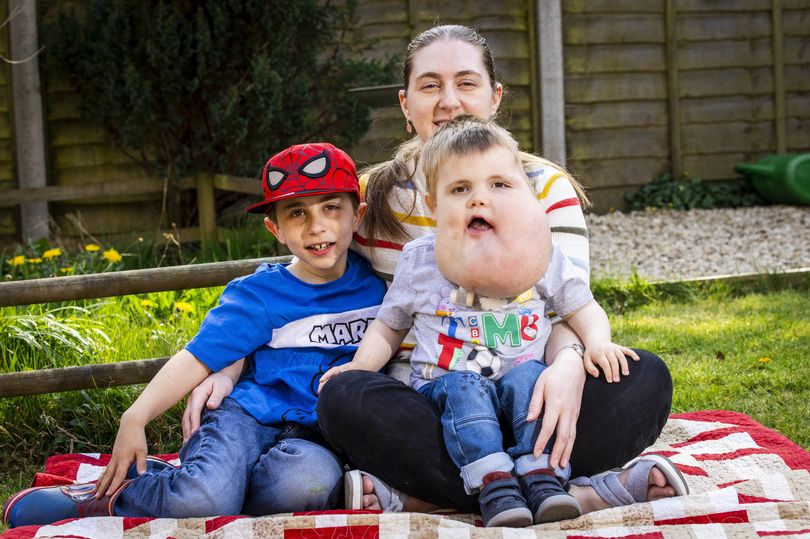 A little boy with cysts the size of a grapefruit on his face has defied the odds to take his first steps – but his heartbroken mum says he’s been the victim of some nasty comments.

Alex Grabowski was born in January 2017 with cystic hygroma, which gave him large cysts the size of grapefruits on his face and in his airways.

The now four-year-old has faced eight operations to reduce the growths – each lasting eight hours.

Single mum Emily Grabowski found out Alex had cystic hygroma at her 20-week scan, and said she was scared for what her unborn child would look like, but instantly fell in love with him when he arrived.

Emily, 35, from Midsomer Norton, Somerset said: “I was scared to know what Alex would look like. There were so many unknowns but as soon as I saw him I thought he was gorgeous and burst into tears.

“Caring for him is hard work, but I wouldn’t have it any other way. We don’t know what the future will hold, but I can only hope. Alex has already come on leaps and bounds.”

But she added: “Most people are lovely about him but there have been some nasty comments.

“People have told me he looks scary and one man came up to me and asked me if he was real. I’m worried about him having to deal with it by himself when he is older.”

Alex was born via an induced c-section and had to spend six months in Bristol Royal Hospital for Children, Bristol, while he had his first surgeries and Emily was trained how to care for him.

Now, after enduring so many procedures since he was born, the brave kid can independently walk and his speech is beginning to improve – despite doctors fearing it would be too much of a struggle for him.

He can now say Peppa Pig and form sentences after saying his first-word ‘bubbles’.

Alex still has a tracheostomy to help him breathe and has to be fed with a feeding tube, but Emily hopes in years to come he will be able to have it removed and live even more independently.

“He’s doing amazingly and is starting to talk better too,” Emily said.

“We still sign with him and he is very good at getting his point across.”

Alex was delayed when it came to learning to walk like the weight of his face and the angle of the cysts make it hard for him to see to balance himself.

Alex has had to have eight surgeries to remove parts of his cysts, which are the size of a grapefruit and a recent debulking of his tongue has meant it is easier for him to talk.

Despite the tot’s strides over the last year, Alex will still have more debulking surgeries to remove more of the mass from his face and his mum fears what people will say about him when he’s older.

Luckily, Emily has managed to build up a support network as she is in touch with Rainbow Trust Children’s Charity- a charity that supports families who have a child aged 0-18 years with a life-threatening or terminal illness- and her family support worker, Wendy, since Alex’s birth.

She is also supported by Jessie May- a charity providing nursing care at home for children and young people with life-limiting conditions – and Children’s Hospice South West – who provide respite should Emily need it.