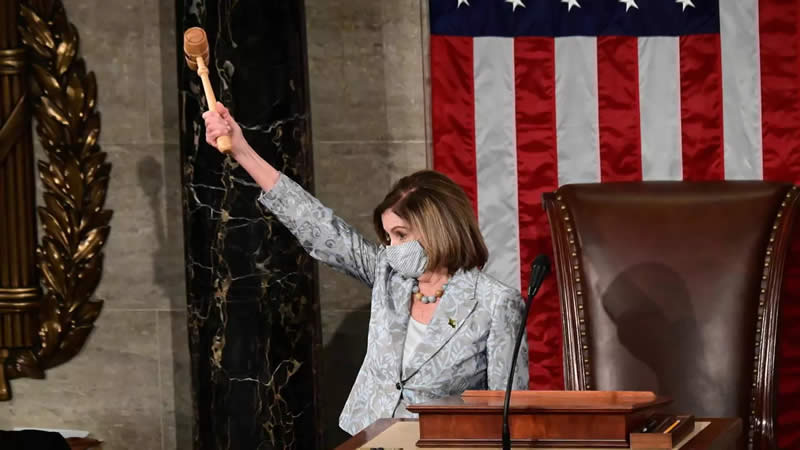 House Speaker Nancy Pelosi dramatically ripped up President Donald Trump’s State of the Union speech last year because she had been promised a big announcement on healthcare or opioids.

Instead, Trump gave Rush Limbaugh the Presidential Medal of Freedom.

The process began when Pelosi realized she didn’t have a pen, and so started making small tears in the pages of her copy of the speech for each ‘lie’ Trump said, according to excerpts DailyMail.com obtained from Susan Page’s new biography, ‘Madam Speaker: Nancy Pelosi and the Lessons of Power.’

Pelosi had originally been primed for the Trump White House to make an announcement on opioids or healthcare when he spoke to the joint session of Congress on February 4, 2020.

When she brought up healthcare to Vice President Mike Pence before Trump’s address, he replied, ‘Oh, you’re going to be very happy about what he says tonight.’

Instead, it was the one moment of Trump’s presidency where Pelosi was rattled by the president publicly, according to Page.

Trump knocked progressive Medicare-for-all proposals at ‘socialist’ and took credit for curbing opioid use, but there was no grand announcement.

Instead he pointed out ‘a special man’ in the chamber’s gallery – Limbaugh, who died earlier this year – and presented the right-wing talk radio show host with the nation’s highest civilian honor, with first lady Melania Trump putting the ornate medal around his neck.

As Pelosi scanned Trump’s remarks, about one-third of the way through she wanted to mark the page.

‘I thought, “This page is so full of lies, I want to be able to come back to it,”‘ the House speaker told Page.

The speaker, however, didn’t have a pen up on the rostrum.

‘I should have probably had a pen in the drawer, but I didn’t have a pen right there,’ Pelosi recalled.

Instead she tore the paper, making ‘just a little nidge,’ to mark the spot.

‘She made a little tear in the next page to mark another assertion she saw as untrue. And the next. By the time he was halfway through the speech, it occurred to her that she might just as well tear the whole thing in half, but she wasn’t ready to decide that yet,’ Page wrote.

Pelosi told the USA Today journalist, ‘Then, as it went forward, it was so full of lies, so full of misrepresentations, untruths. It was like “What?”‘

‘My members were furious,’ Pelosi continued. ‘You could see steam coming out of the caucus. I’m not talking about the left wing; I’m tlaking about all of the members. They were so offended.’

‘He used the Congress, the House chamber, as a reality-show set,’ she added. ‘And then he had no reality in his speech. People were just furious.’

As Trump concluded his remarks and was applauded by the Republican side of the room, Pelosi divided her speech pages into four sections and ripped them apart.

‘It would be the most public display of disrespect in modern times from the leader of one branch of government to another, delivered almost face-to-face,’ Page recalled.

Pelosi told the biographer she had no regrets – and felt ‘liberated.’

‘I’m ever gracious and respectful of the office, if not the person,’ Pelosi said of the presidency. ‘I’m not beyond that in partisanship or something, but not telling the truth, that was just beyond.’

The IRS Will Issue Monthly Stimulus Checks To Families, $3,600 Per Child