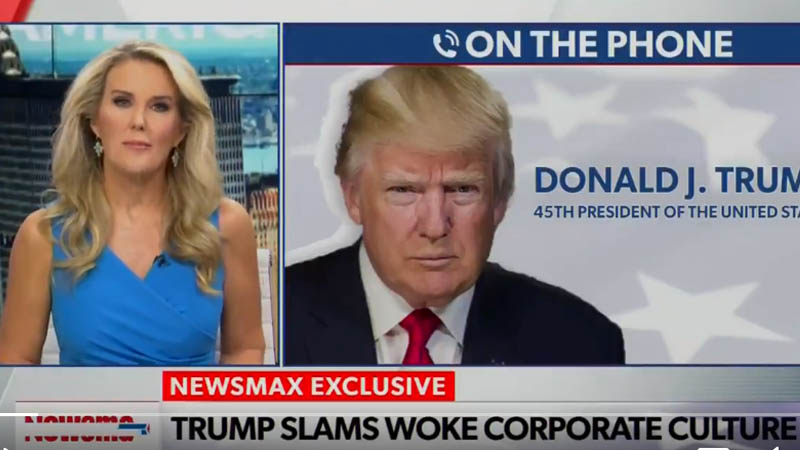 We don’t know if the universe is going to go out with a bang or a whimper but we’ve got a pretty good idea the direction that Donald Trump is headed. He did a low-rated interview on Newsmax Tuesday, and it is part of a downward trend in not only ratings, but queries in search engines and attention in general, as Trump fades down to a dull orange, which will go to grey and eventually to black.

Can it be true that the creature that dominated our airwaves, our psyches and our lives for so long is now returning to obscurity? Yes. Because remember that Trump was and is, first and foremost and above all things, a creature of the small screen, a phantasm of illuminated pixels, form only, devoid of depth and substance. Washington Post:

In March…[h]is Google search interest was lower than at any point since June 2015, as was the amount of time he was seen on cable. The networks were covering him far less, down to the point reached last year when the pandemic overtook Trump in the national attention. Besides that, the average mentions of Trump in March were back to the levels seen in November 2015.

The former president still holds out hope that he will be a powerful force in American politics and culture moving forward. In one of the mostly ignored news releases that have come to replace his beloved tweets, Trump this week promised his supporters that “the best is yet to come!” We can all hope that it is, but it seems increasingly unlikely that Trump will be at the center of events should that come to pass.

“We really appreciate so much of your time today,” the Newsmax host said as she let Trump go. “I know that our Newsmax viewers were watching and they’re appreciative as well.”

That’s probably true. The frustration for Trump, of course, is that Newsmax doesn’t have very many viewers.

This is a sample of what you missed.

This is a good parody of Trump, who himself is a parody of a human being. If he had behaved with even a modicum of decency and grace he would be a member of a deservedly elite and very small club, that of former U.S. presidents.

They’re all friends and colleagues, men (so far) who have an amazing shared experience in their lives, their sojourn in the White House. Trump isn’t a part of that club. He doesn’t want to be and he can’t be. His ego is too big and his soul is two sizes too small.

In another sense, though, Trump is an amazing being. He’s brushed elbows with the great and the infamous, yet none of it has ever rubbed off. He’s too self-absorbed and petty. Roy Cohn saw that many years ago, that Trump was a transactional-only beast. “Donald pisses ice water,” were his words.

It’s only April. A few more QAnon backfires and you’ll hear no more of El Caudillo de Mar-a-Lago, except in political satire. That is where his legend will live, as an eternal joke.