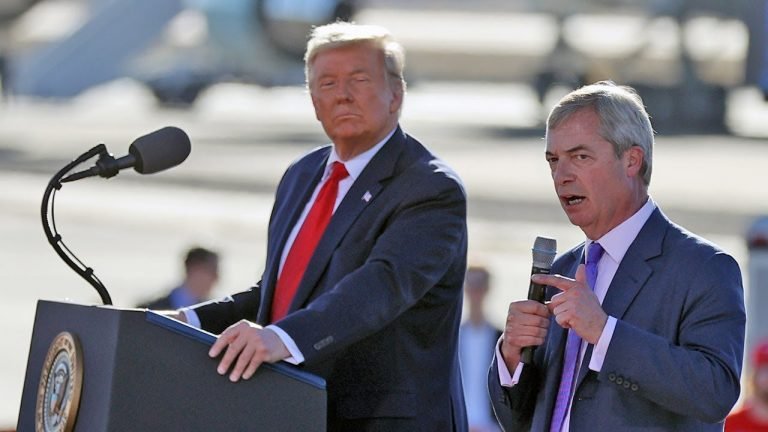 One hundred one days have passed since sleepy Joe Biden became president in a sham election process.

That’s a little less than four more years of radical policies on tax, environment and further pandering to the left and the “woke” brigade.

The Democrats have threatened to pack the Supreme Court, add additional Senate seats in blue areas, and even consider abolishing the Electoral College system itself in the first 100 days of Biden’s presidency.

And they’ve not even started.

It’s no news that our Constitution has been under constant attack during these first 100 days.

Attacks on our first and second amendment have been progressing unabatedly.

No Patriot is happy; most republican politicians (not the RINOs) and activist have been down spirited.

However, UK politician and Brexiteer Nigel Farage say he sees a clear path to victory for President Trump come 2024.

As we now know, the establishment spent years trying to overturn the democratic will of the British people,” Farage wrote.

“However, after launching the Brexit Party in 2019 and winning the European elections with just six weeks of campaigning, we showed that the grassroots can fight back to victory,” he added.

More on this story:

As a result, there is an awful sense that the Constitution of the United States is under attack and, after four years of wins under former President Trump, that does not make for happy conservative campaigners as things stand.

As I arrived in Miami after a two-week quarantine period on the island of Saint Maarten in the Caribbean, many activists told me they find it unfathomable that President Trump won 74,222,958 votes but did not win victory.

Allegations of electoral fraud still loom large and there is not a great deal of enthusiasm in the air.

Over the past week, I’ve spoken in private to several members of Congress who are utterly demoralised.

My first stop was to see an old friend. President Trump looked fit and well at his Mar-a-Lago base and is very seriously considering another run next time around.

Nobody can inspire conservatives in the US like he can and the Democratic Party should think carefully about underestimating him. One thing is for sure in American politics; Trump is not going away.

His admiration for our Queen and our country is unrivalled with anybody else on the world stage, and he still makes a fantastic ally for the UK.

Over the next six weeks, I will visit nearly a dozen states, in association with grassroots organisation . Its mission is to campaign for lower taxes, less government and more freedom, which sounds good to me in this new Covid era.

On my “America’s Comeback Tour” we will re-energise activists across the country and get them back out on to the streets.

Grassroots campaigning is politics’ least glamorous side but, after 25 years of building Ukip and then the Brexit Party, I can tell you that it’s the most important. In fact, by knocking on doors and getting voters out you can increase the vote share of a candidate by more than 20 percent.

The American conservative movement can take back their country as we did by offering people a hopeful image of the future. In politics, it is not just elections we must win, but hearts and minds.

We will mobilise Americans with a positive message.

Any Brit wishing to visit the USA during the pandemic must spend two weeks in quarantine. I spent my fortnight of seclusion on the Caribbean island of St. Maarten, which is why I arrived at Miami Airport a few days ago with a heavy suntan. I will spend the next six weeks touring the United States in association with FreedomWorks.

Any Brit wishing to visit the USA during the pandemic must spend two weeks in quarantine. I spent my fortnight of seclusion on the Caribbean island of St. Maarten, which is why I arrived at Miami Airport a few days ago with a heavy suntan. I will spend the next six weeks touring the United States in association with FreedomWorks.

You may wonder: what use can an English Brexiteer be in America? The fact is, I’ve always felt at home in the U.S. and, in business terms, certainly feel closer to the country than I do the continent of Europe. Indeed, I began my career in 1982 in the London office of the Wall Street giant Drexel Burnham Lambert. I then spent many years working for the large Chicago broker Refco. In political terms, I had visited the Hill and addressed members of Congress and the Senate several times before the Brexit referendum in 2016, even if very few people in U.S. politics had a full understanding of the European Union at that time.

When the Brexit result came through five years ago, everything changed—and I believe it had a huge impact on America. I remember arriving in Cleveland that summer for the Republican Convention and being astonished that bartenders and taxi drivers would point at me asking “Aren’t you that Brexit guy?” The Brexit theme was picked up by Republican challenger Donald Trump, who went around the United States calling himself “Mr. Brexit”—at least, until I arrived, when he transferred the name to me.

There is no doubt that the Trump campaign believed Brexit’s key message—that the establishment could be beaten—and that that message was a crucial part of its success in the November 2016 election. I spent many weeks in America in the latter half of 2016 advancing this argument in various media outlets and I know that Donald Trump himself still considers it to be true. Looking back, it is clear that 2016 was an epic year for the populist revolt, and for once it was Britain that led the way.

Farage says he believes President Trump will run again in 2024 and win back the presidency, buoyed by a groundswell of populist support. While I do not doubt that President Trump will be President again come 2024, I know we shall overcome even now and have our stolen mandate back, starting with the audits in Georgia and Arizona.