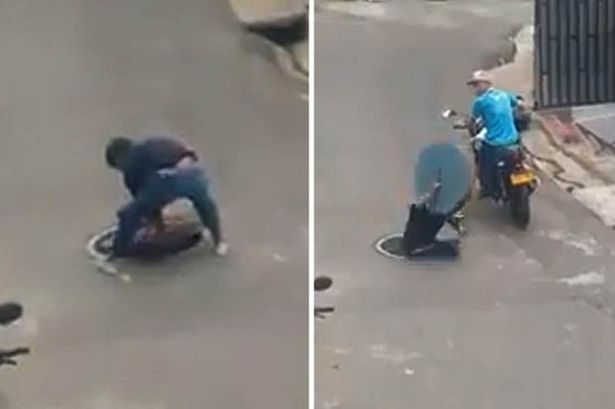 A thief was given hefty dose of karma when he fell into an exposed drain after trying to steal the manhole cover.

The incident was filmed by onlookers in the city of Medellin in the north-western Colombian department of Antioquia.

In the clip, the man can be seen lifting up the manhole cover before a biker rides up alongside him and asks him what he is doing.

The thief then lifts up the metal object above his head but loses his footing and plunges into the hole.

Applause rings out from those watching as the red-faced man clambers back to street level.

He then hobbles off in visible pain, leaving the manhole cover behind him.

The video quickly went viral after being posted online and attracted a host of comments.

One viewer wrote: “Karma is beautiful.”

Another said: “That is the reason I do not steal anything because I would probably be like the thief in this video!”

According to Infobae, the theft of manhole covers, which can be sold for scrap, is a real problem for many cities in Colombia.

Triple A, the company that runs the sewer system, said that in the first semester of the year, 103 manhole covers were stolen in the city of Barranquilla alone.

The company said they had to invest 20 million COP (£4,140) to replace the stolen covers as open drains are dangerous for road users.

It comes after another thief got instant karma when he tried to rob a bus only to end up being beaten up and stripped naked.

Why you should think twice before eating canned cranberry sauce