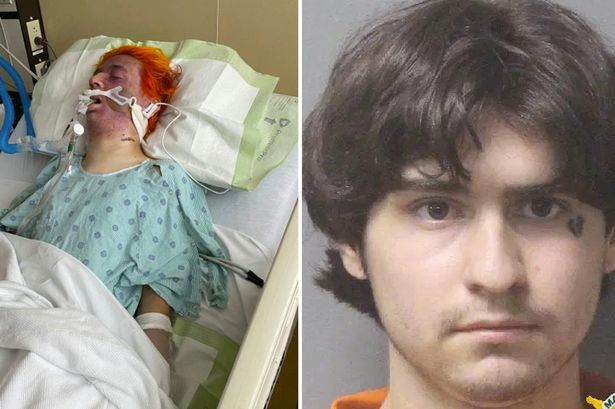 A young man on a date ended up enduring a brutal attack that saw him strangled, tortured and naked in a bathtub with his hands nearly sawn off, it is alleged.

Holden White, 18, survived the horrific assault allegedly carried out by his date Chance Seneca, 19, and has vowed to put the traumatic experience behind him.

Holden, from Lafayette, Louisiana, met Seneca on the gay dating app Grindr last summer and the pair spoke for over a month on the platform before eventually meeting up.

The victim spoke to CBS17 and explained there were no red flags, which is why he decided to meet Seneca on June 20, 2020.

Seneca picked up Holden and they reportedly went over to his house where they played video games in Seneca’s bedroom.

All seemed well until Seneca left the room to fetch something, and Holden claims he was strangled from behind with a cord.

The teen struggled to fight back until every blood vessel in his face ruptured before his vision and memory blacked out.

Holden says he remembers nothing until he came around naked in the bath.

“The next thing I remember I was in the bathtub, and he was slicing open my left wrist,” he alleges.

Surrounded by his own blood, he faded in and out of consciousness convinced he was about to die.

As Holden lost consciousness again, Seneca reportedly called the police, telling them he had killed a man.

Thankfully, Holden wasn’t dead, with emergency services rushing the victim to hospital where he fell into a coma for three days.

Holden had been subjected to a number of vile injuries to his neck and head and his wrists were so damaged as his hands were nearly sawn off.

No rape kit was provided as Holden recovered from the attack and Lafayette police questioned him only two days after waking up.

Holden isn’t satisfied about the handling of his case and believes he deserved more answers from police as to what happened, but won’t receive any additional details until he hears them in court.

“You can’t let other people control your story because it’s your story,” he told News 10.

“My one goal would be to, yes, keep him in prison, and then number two, to let everyone know if you have a traumatic experience happen to you, it’s okay to be sad about it but you need to not stay sad the whole time.

He plans to continue to use Grindr for dating – but only meeting in public places.

He added that the FBI is investigating the accusation of hate crimes against Seneca, who will appear in court for a pre-trial on March 3.

Holden is sure the alleged attack was homophobic, stating: “He chose to go on the app Grindr.

“He went on an app designated for gay people.

“He chose to choose someone who is gay and very proud of his sexuality.”

“He knew what he was doing. This was preplanned.”

The brave victim concluded: “It will always be a hate crime to me.”

A GoFundMe page set up by Holden’s sister to aid his recovery process has raised over $100,000.

Watch live: Biden delivers his first primetime address on next steps in fight against Covid