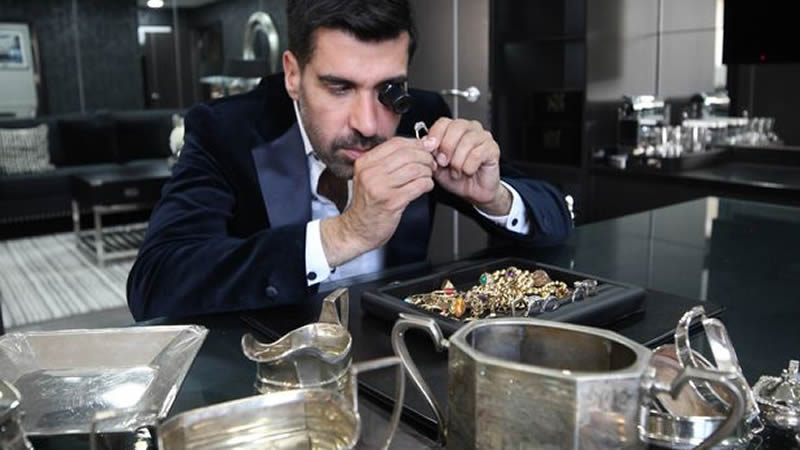 Running out of time to save her disabled son, Fran Sawyer reluctantly decided to sell her belongings to a pawnbrokers.

The single mum-of-two is a full-time carer to her 16-year-old son, who needs to see a nerve specialist before it’s too late.

Fran’s son was born with cancer and only weighed 3lbs, while the tumour of his back was 6Ibs, leaving doctors fearing he would not live beyond the age of 7.

“It’s been so tough for him. Now he’s 16 I can get help for him. That help needs to be soon or I will lose him,” says Fran, who needs money to take her son to see a nerve specialist.

Fran was married to a businessman and had a 3 acre home with chauffeurs and 17 horses, but had a difficult time after they divorced looking after her disabled son.

Now Fran hopes to give her son a better quality of life with her “pot of gold”, a watch she inherited from her uncle and some jewellery, but the stakes are incredibly high.

She turns to third generation pawnbroker Dan, who runs one of the many businesses turning people’s possessions into cash.

Most people have the image of a pawnbrokers as a dingy back back alley shop, but the landscape has changed and they now deal in helicopters, yachts and supecars.

The second oldest profession, pawnbrokers make money through buying valuables and selling them on for a profit.

They also pay to loan items and make money through interest, but the catch is if you can’t pay back the cash then those assets are sold and the pawnbroker retrieves their money.

It’s a lifeline for people who are asset rich and cash poor, but Fran admits: “Pawnbrokers, well we all need them cause you never know. But I wouldn’t trust them as far as I could throw them.”

Fran has wants to sell a luxury Patek Philippe watch she was given by her uncle, which he won in a poker game, as well as a set of earrings.

She is expecting to get £15,000 for the watch and £2,000 for the earrings, but pawnbroker Dan is concerned they may not be the real deal.

If they are genuine, the money it commands could be life-changing for Fran, but with the market in fake watches booming, Dan needs expert advice or he could be massively out of pocket.

Watch expert Josh explains that there are 40 million fakes made each year, but the one given to Fran by her uncle is “without doubt” the real thing.

He tells Dan that this incredibly desirable make of watch is “recession proof” and worth a considerable sum of money.

Nervous Fran doesn’t get much sleep the night before the big reveal.

The worried and nervous mum is hoping for £17,000 to fund her son’s life-changing operation, but admits she fears her items will be worth a lot less.

But she gets a shock when pawnbroker Dan explains she is in possession of a very special model of watch – with only a few thousand ever made.

Fran’s jaw hits the floor when Dan reveals he is prepared to pay an eye-watering £85,000 for her watch.

Wiping away the tears, Fran says: “That will help so much because I’ve been struggling for 16 years with my boy being ill. That would just be life-changing for us.”

However, that’s not all as there is still the small matter of the earrings, which contain an old cut of diamonds which are incredibly popular.

“No way. It just hasn’t gone in. Brilliant, I’m over the moon. I actually feel quite sick,” admits emotional Fran.

“He’s sitting there all white teeth smiling and I’m thinking, ‘What’s he up to.]?’ I felt like I was going to pass out and cry. I just cant believe it. It doesn’t happen to me.”

As well as paying for her son’s medical bills, Fran says she will celebrate by having a kebab and four beers at the weekend as a treat.

While Dan remains very coy on how much he is going to make from the deal and doesn’t reveal the full amount.

“One of the best aspects of being a PB is telling someone their item is worth so much more than they thought it was,” he says.

“The look on their face is priceless I still make money out of it but, it’s priceless.”

The first episode of this new ITV series pulls back the curtain on the world of pawnbroking in the midst of the current economic crisis, telling the story of both the pawnbrokers and the people looking to part with their prized possessions.

With over a million pounds worth of assets passing through Britain’s pawnbrokers hands each day, there’s no way to plan for what valuables may come through the door.

The series opens the door to this fast moving and often lucrative industry, telling the story of people with incredible assets and the eye-watering stakes at play; for both the owners and pawnbrokers trying to close the deal and make a profit.

With unforgettable characters, heart-warming stories and an array of incredible assets, this series will reveal the emotional and financial stakes at play in the often hidden world of pawnbroking.