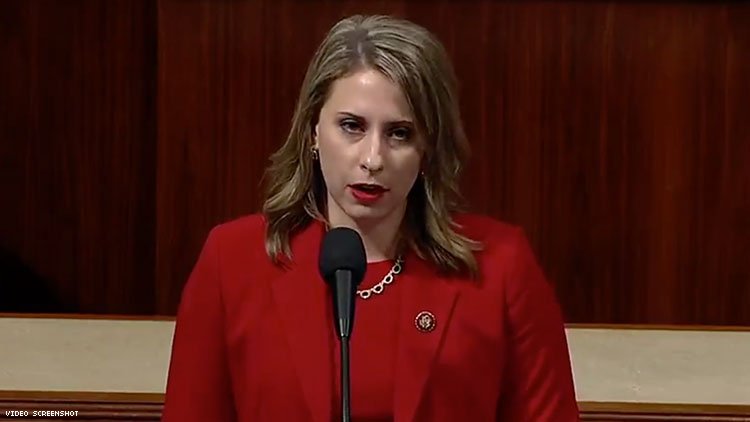 Hill, a bisexual Democrat, resigned her seat in 2019 after the nude photos of her were published and news emerged that she had a three-way relationship with her husband and a campaign staffer. She was also accused of having an affair with a member of her congressional staff.

Hill was a representative for California’s 25th congressional district which covers most of northern Los Angeles County and parts of eastern Ventura County.

She’s seeking unspecified compensatory and punitive damages and an injunction preventing further distribution of the photos.

“This case is about a man… stopping at nothing to destroy the life of his ex-wife… when she dared end their relationship after more than 15 years of physical, sexual, verbal, emotional and psychological abuse,” Hill’s court papers allege.

Hill alleges in her court papers that she lived in fear that if she ever tried to leave, Heslep would kill them both and their animals.

Representatives for the defendants could not immediately be reached for comment, but Heslep has previously denied allegations of abusing Hill.

In October 2019, months after Hill had left her relationship with Heslep for good, RedState.com published “the first in a barrage of articles that included pictures and intimate text messages,” according to Hill’s court papers. “Then the sexually graphic photos were released.”

Hill “suffered extreme emotional distress, attempted suicide and was forced to quit her job, which in this case was the representative of California’s 25th Congressional District, one of the most difficult-to-get jobs in the universe,” her court papers state.

On December 8, a Los Angeles Superior Court judge ordered Heslep to stay at least 100 yards away from his 33-year-old ex-wife, as well as her mother and sister. The ex-couple officially divorced in October.

Report Claimed Kim Guilfoyle, Who Led Trump’s Finance Team, Once Offered A Lap Dance To The Donor Who Gave The Campaign The Most Money