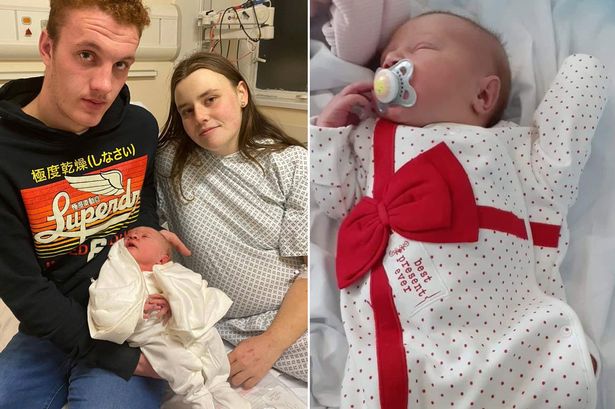 A teenager who went to A&E with a sore back gave birth in a hospital toilet having no idea she was pregnant.

Shocked Dion Seaborne, 18, popped to the loo while waiting for tests and ended up having a “perfectly healthy” daughter.

The new mum said she had not experienced any signs or symptoms that she was pregnant and she had never “felt so scared in her life”.

She told The Sun: “I didn’t feel any different. I hadn’t put on weight. In fact everyone was telling me I’d lost some weight.

“I had to shout for a nurse to help because I couldn’t reach the emergency button and, at this point, Lilly-May was in the toilet.”

The teenager immediately rang her 18-year-old partner Callum Morris to give him the shocking 4am news.

Dion, of Griffithstown, South Wales, said he was so surprised he rang his mum to tell her before he raced down to the Royal Gwent Hospital in Newport with some clothes and other things for her and to meet his daughter for the first time.

She said: “His face was a picture. He couldn’t stop smiling, saying he loves her and giving her cuddles.”

The teenager tuned 18 in August and she said it was just as well she’s ‘not a big drinker’.

It comes after 17-year-old Aimee Stevens gave birth in a loo after being told at a doctor’s appointment she was “five to six weeks” pregnant.

Three days after learning she was an expectant mum Aimee suddenly felt an ­overwhelming relief while clutching her tummy and looked down into the toilet bowl.

She saw her newborn son’s bum poking out of the U-bend.

Medics believe 5lb 9oz Ché Andrew Cain was around 38 weeks when he was born – but they don’t know for sure because Aimee flushed the placenta down the toilet.