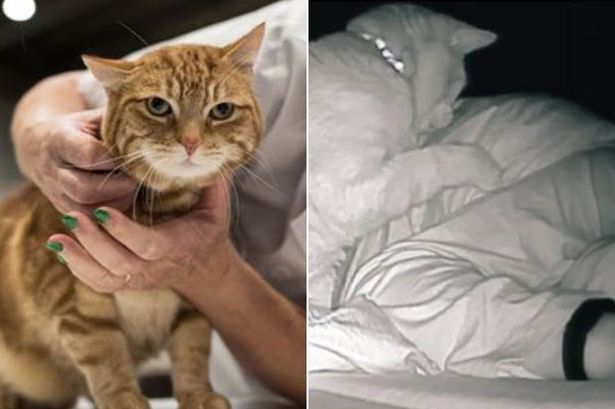 A cat owner feeling tired all the time decided to solve the mystery by setting up a night vision camera next to her bed – catching the culprit red-handed.

In the clip, uploaded on TikTok by user @susieandmollie, a darkened room is seen, with the woman lying in her bed while the TV plays cartoons in the background.

Suddenly, two glowing eyes come into view and a ginger cat trots over the bed.

The cat, who is fittingly called Ginger, sits right next to his owner’s sleeping figure and lifts up a paw, before prodding her sharply in the arm.

He then does it again, and again.

The video fast-forwards and shows the cat hitting the sleeping woman from the hours of 11 pm to 3 am, pretty much solving the reason for her daytime sleepiness.

Unsurprisingly, the video was watched more than 260,000 times and “liked” nearly 40,000 times, with many cat fanatics saying their furballs like to torture them in the same way.

One person commented: “My cat does this! She will harass me ALL night some nights.

“I’ve read it’s because she’s a senior and older cats get dementia and sometimes are confused.”

Interestingly, another viewer commented: “This is how one of my friends found out they had sleep apnea.

“Cat woke them up every time they stopped breathing.”

A fourth cat lover wrote: “Mine did the same and now I lift the covers and she climbs in and falls asleep with me.

“Try it! They like the warmth and tight cozy places.”

Another cheeky cat was recently caught on camera stealing the weirdest objects from neighbouring homes and giving them as “gifts” to her owner.

This comes after a beautiful video showed a cat and horse with an unlikely friendship greeting each other at the stable, in a heartwarming encounter.