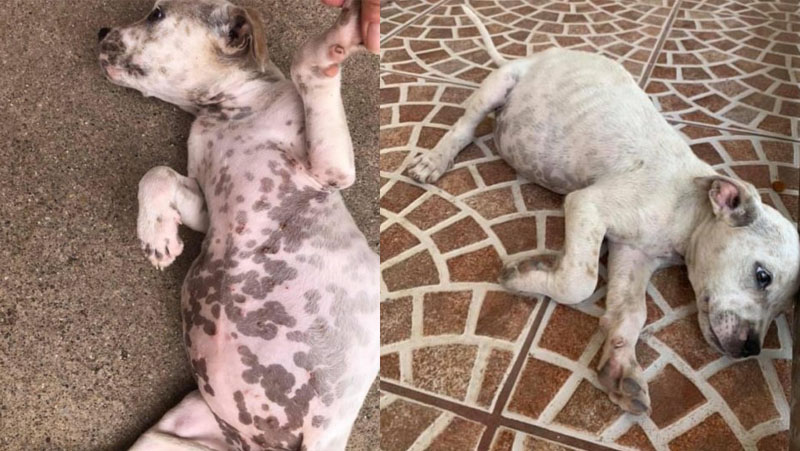 As temperatures increase in many parts of the United States, stray animals are left to fend for themselves in the heat. They spend their time foraging, looking for shelter, and trying to stay out of harm’s way and danger. An emaciated little puppy from southern Texas found herself in a perilous situation on the hot, dirty streets. If someone didn’t come along and help her, the innocent pup would certainly perish.

A homeowner heard some commotion outside and got up to investigate the source of the noise. She was saddened and shocked by the sight of a skinny puppy fighting for her life. She was filled with parasites and fleas, very underweight, severely dehydrated, and her head was stuck in a water bucket. She immediately removed the bucket from the frightened little girl’s head, and she began to crash. Thankfully, the good Samaritan helped the pup fight to stay alive.

First, she moved her to a cooler area out of the direct sun, and then she gave her some Pedialyte and NutriCal to get nutrition into her body. The dog was rushed to a local rescue, but she required more medical care than the rescue could provide. The kind folks at Dallas Dog – Rescue.Rehab.Reform stepped up and took her in. “Although we are stretch thin, it is tough to watch some of these dogs suffer and go without medical care,” they wrote on Facebook.

Emaciated dumped puppy trapped in a water bucket. Homeowner heard commotion from her dog only to find this little girl…

As of this writing, she is coming along, and they have decided to name her Calli. I Love My Dog reminds our readers to reach out to your local shelter or pet rescue groups if you are interested in bringing a dog into your life. There are millions of awesome dogs waiting for their forever homes who are just a mouse click away.