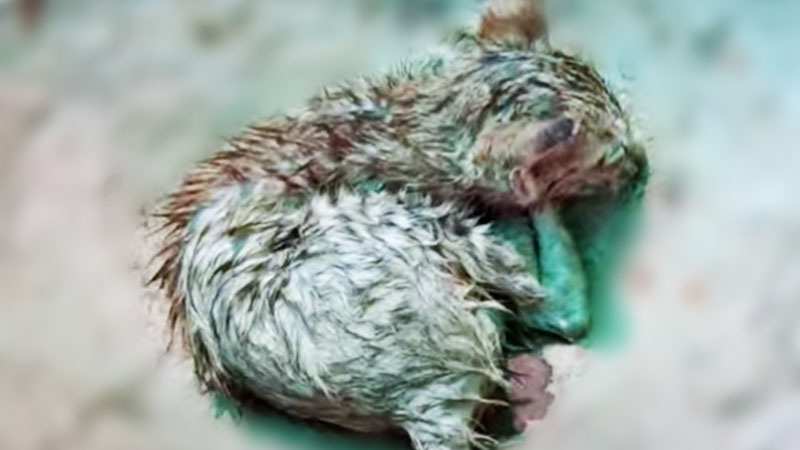 It a universal truth if we saw any animal in pain or problem. Extensively we do reports only on dog but other animals have right to look after. Nowadays we can see that in many households, cats and dogs co-exist charmingly. Most of them become best friends. This story inspired everyone about a unique kitten. The kitten, later named Horrera, was found hardly breathing.

The family thinks after discovering that the kitten didn’t make it. But in seconds they phone Animal Aid in the case rescue group might help. Barely but Horrera held on that all because of the pity of human. After a storm passed away her tiny body was soaking wet. She lay in a cement bowl hardly puffing. They had a small crate ready before the rescuers arrived.

After the observation of her health, they had to get her to their clinic as fast as possible because she’s losing her life. The rescue person was afraid for her life fearing she wouldn’t make it because she was so small and weak. After examining her body, it was found out that she wasn’t wounded. There are many chances that she fell or was hypothermic from the storm.

Her organs were shutting down and they had to hurry! On the other hand, the kitten was also struggling to take a breath. Because of her illness, her breaths were slight and rapid, and also her body becomes loose. No person had much hope but suddenly something changed. On the exam table vet immediately gave her pain medication and within the minute, her ears perked up a bit. No doubt this was an excellent indication.

While Horrera’s recovery was touch and go, things did start to improve.  Her new human friends nearly burst into tears When she began to eat tiny bites of food. Her tiny body needed nutrients so badly after that illness. So, sure that eating was a pretty big deal. Not only was she feeling a bit better but she had the will to live!

Sickly Baby Elephant Refused By Herd, Finds A Dog To Accept Him

Why Cats Sleep in Bed with Humans