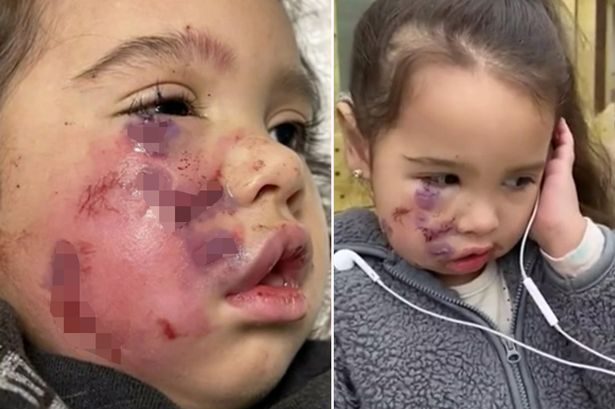 A three-year-old girl mauled in a vicious dog attack left her parents in tears as she told them she was now “ugly”.

Ronin Gordon-Waldroup was attached by a ravage canine at a restaurant in Texas in front of her shocked parents.

Mum Cleveretta said that their youngster was a few steps ahead in the line to order nuggets when she was confronted by a pit bull.

A witness told Local12 News that the mutt “had a hold” of the tot’s face and when its owner yanked it away it dropped poor Ronin “like a rag doll”.

Dad James then chased the pet owner down the street as she tried to flee, local media said.

Meanwhile the toddler was left covered in blood and needing 15 stitches in her face.

Ronin has been left needing plastic surgery — although it is hoped that the scarring will be minimal.

The youngster has been left tearful as she tired to use make up to cover her wounds.

Cleveretta told Local12: “My husband and I walked into our bedroom and she has my make-up brushes.

“And she’s trying to put make-up on her face when I asked her why she’s doing that.

“For a 3-year old to turn to me and say mommy I’m ugly. It’s earth-shattering.”

Locals have now clubbed together to raise money to cover the families medical bills.

The page reads: “I’m begging for justice for my little girl. Ronin is 3 years old and had to get 15 stitches in her face! If you can help whatsoever with any little thing we would be so appreciative so that we can pay for Legal action and continuous medical expenses.”

One donator said: “I have grandchildren and would be devastated if this attack would happen to them. Would be praying for your child and family.”

Another added: “I have a 3 year old daughter. I cant even imagine the pain you are going thru. I’m so sorry, I really hope she recovers well without any scars in her adorable face.”

Mischief-Monger Cow Keeps Getting Himself Stuck, But This Time He’s Not Alone