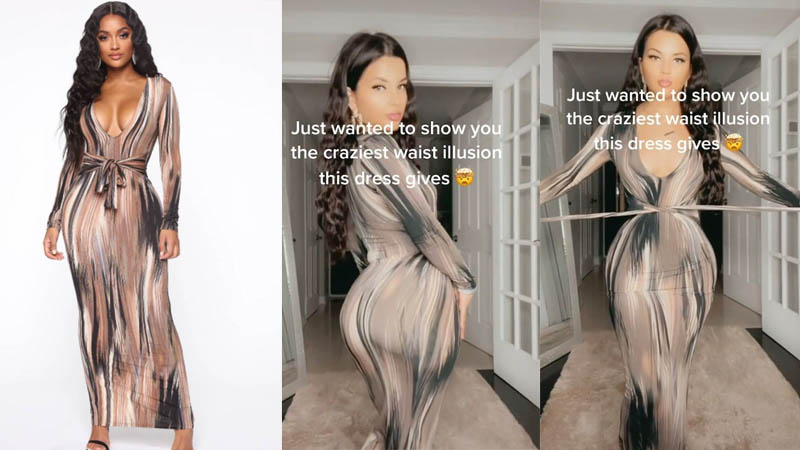 A woman has left fans stunned after showing how a flattering dress made it seem like her waist “disappeared” in seconds.

TikTok user @jemianxo recently bought a dress from Fashion Nova and found out the paint brush-patterned on the garment created an optical illusion.

Sharing the secret on her social media, ties the matching belt around her waist.

As she does so, the waist appears to shrink before the viewers eyes.

She wrote: “Just wanted to show you the craziest waist illusion this dress gives. Looks like I tied my organs together.”

The fashion influencer gave details to viewers who asked for the dress details.

“The dress is from Fashion Nova, called ‘Mind Of My Own Maxi Dress’,” she explained. “Very stretchy! I got a XS for references.”

Viewers were impressed with the visual effect but some said it looked “creepy”.

“I got scared,” a second added and a third penned: “That is quite terrifying.”

Many were convinced to make a purchase from the online retailer as they could not wait to try on.

But others argued the dress does not give any optical illusion because the model already has an hourglass figure.

“It’s not an illusion you’re just snatched,” a viewer suggested.

Another added: “Pro tip: already have an hourglass figure.”

This came after another Fashion Nova shopper shared her confusing cut-out tights with multiple openings at the rear and legs of the garment.

One woman caused a stir online after posing in a Fashion Nova boob-bearing maxi dress as viewers claimed it looks “painful”.

Girl, 3, sobbed ‘I’m ugly’ after dog shook her ‘like a rag doll’ in horrific attack

How to make handmade accessories

The Only Wedding Dress Trends 2019 Brides Need to Know