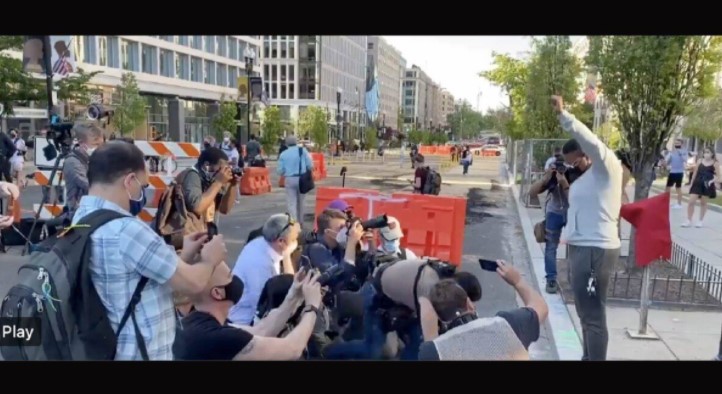 Is this the photo that will be used to show how “peaceful’ the protests are?

If you were scrolling through your social media timeline and you saw a picture of a young black man with his fist raised solemnly in the air, you’d naturally think that he was part of a large group of people who were out in the streets peacefully reacting to the George Floyd murder verdict.

But that wouldn’t necessarily be the case.

Because that’s what happened in BLM square in DC, where there were actually more journalists than protesters.

As a matter of fact, there was just one so-called protester…and he was posing for a photo in front of about a dozen journalists, who were on the ground snapping pictures and crawling all over the place to get better angles.

Is anything we see real nowadays?

Here are some of the comments:

“Its all theater, all the time. Sad.”

“fake news. all staged. totally made up”

“They are going to tell a story that doesn’t exist. The media is corrupt”

“This is a meaningless photo op.”

“That’ll be the next cover of Time.”

Is this the photo that will be used to show how “peaceful’ the protests are?