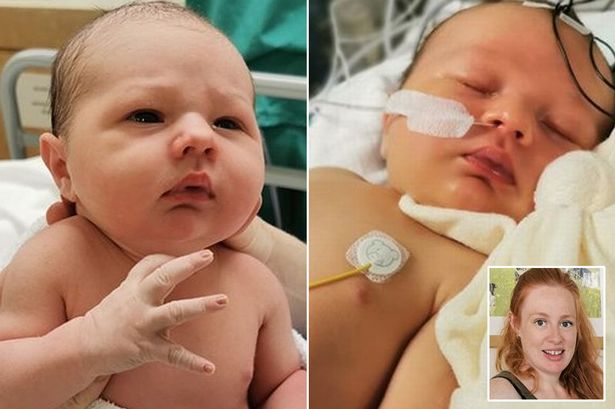 A baby boy’s parents have spoken of their heartbreak after he died of a rare condition.

August and his mum were moved to the postnatal ward after Adam said goodbye for the night, Teesside Live reports.

Jessica said: “I didn’t want to take my eyes off him for a second, and neither did his dad.

“We were both so relieved he had arrived here safe and sound.

“After seeing his beautiful little face, we knew the name we had picked out suited him –  our son was now August Joseph.

“Due to the current coronavirus restrictions, there are no visitors allowed on the postnatal ward, but I thought to myself, ‘That doesn’t matter, we will be home soon enough’.”

But the couple from Middlesbrough, North Yorkshire, sadly did not get a chance to spend much time with their baby as he was diagnosed with an incurable disease.

The day after her baby was born, Jessica noticed August was sweating and soon understood something was wrong.

When a midwife checked the boy’s temperature, she found it was worryingly low.

Doctors ran some tests on August and he was then transferred to the neonatal unit.

Mum Jessica, 28, said: “I went with August – it was the furthest I’d walked since the c-section.

“I no longer cared about myself, I just wanted to be with my son to make sure he was safe.

“I stood and watched as they moved him into an incubator and started attaching wires to monitor him.

“I felt useless, I just wanted to hold my son and tell him everything was going to be okay.”

Due to tight Covid-19 restrictions in James Cook University Hospital in Middlesbrough, Jessica was only allowed to stay with August for two hours a day.

The mum, who also has 18-month-old daughter Evelyn, was moved to a private room back on the postnatal ward.

“I remember thinking, ‘How can I just sit in a room while my son is poorly?’,” she said.

“I started pumping breast milk to send down to him, it was the only thing that was keeping me going.

“It wasn’t until late that evening when doctors came to tell me that August was getting worse and that they still didn’t know why he was so poorly.”

That night Jessica was allowed back to see her newborn baby.

But as she gazed into the incubator, willing her little boy to get better, he stopped breathing.

“I froze as doctors rushed around him to resuscitate his tiny little body,” she said.

“Thankfully, they did. It wasn’t until then that I actually released how serious this was.”

Jessica said the next day was “the worst of her entire life” when a consultant doctor told her that August had suffered a cardiac arrest.

Doctors managed to get his little heart going again, but warned Jessica it may happen again.

The rare disease causes too much ammonia to accumulate in the blood.

The severity and age of onset of OTC deficiency vary from person to person, but in general very high levels of ammonia can be poisonous for the body.

Jessica said she was heartbroken when doctors said there was no cure for her baby’s condition.

She said: “Giving the doctors permission to turn off August’s life support was the hardest thing I have ever had to do.

“It’s a decision that no parent should ever have to make.”

The doctors removed August’s wires and tubes so Jessica could finally hold her son again.

A few family members were allowed in to meet him before he slipped away.

“They had to say hello and goodbye at the same time,” said Jessica. “Some close family never even had that privilege, due to the pandemic.

“I held August as he took his last breath surrounded by love and support from family and the hospital staff.

“The only thing I could do for my son was let him die peacefully.”

The family is still waiting for final confirmation of what caused August’s illness but they have been told doctors are 99% sure it was OTC.

The OTC gene is on chromosome X, and its severe form is encountered only in males, according to Science Direct.

This explains why Jessica and her 18-month-old daughter Evelyn are unaffected by this hidden deficiency.

“We were so excited to finally have a boy in the family, as we have five generations of girls,” said Jessica.

“I can’t stop thinking about how my baby would still be alive, if only he was a girl.”

Jessica and Adam, 32, who run a woodwork business called Yewleaf Wishes, are now determined to help other families on the neonatal unit at the hospital.

And they are raising money in their baby’s memory via a Justgiving page called ‘Three Days of August’ with plans to hold events to raise money when it is safe to do so.

“The reason I would like to raise money for the neonatal unit is because of the love and compassion that the hospital showed me during the worst time of my life,” said Jessica.

“My boy could not be saved that day, but I hope that we can raise enough money to buy a vital piece of equipment so more babies can go home with their families.

“Or to go towards some of the memory making that the NICU do with families.”

10 Signs He Is Losing Interest In You