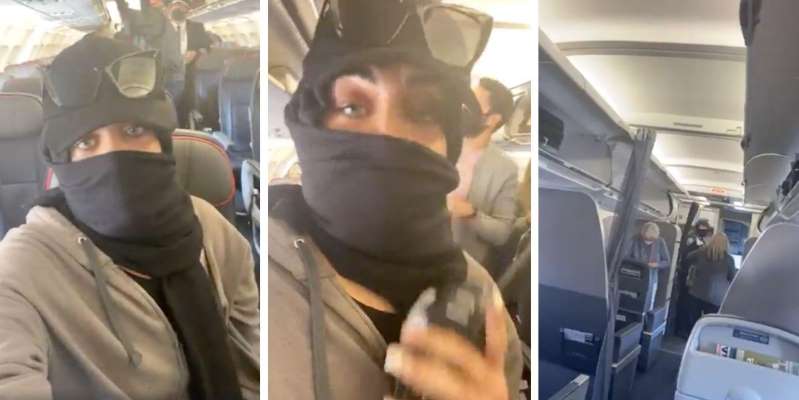 In a thread posted on Twitter, Amani Al-Khatahtbeh, who founded the blog Muslim Girl, said that an “entitled white man” raised a complaint about her to American Airlines staff after an argument at airport security.

I had the craziest experience in TSA this morning.

An entitled white man behind me insisted on cutting me in line because I was “still taking my shoes off.”

When I said he could wait like everyone else, he started going off about how he’s “pre check” and “first class” 1/3

The man jumped in front of her in the queue, she said, and then “shoved” his belongings ahead of hers and ran through the machine.

She then tweeted that if she as a “veiled Muslim woman” had behaved in the same manner she would’ve faced different consequences:

He then proceeded to not only shove his things before mine, but then RUN THROUGH THE MACHINE and TSA did NOTHING!

Not only did they not do anything, a TSA officer had the audacity to tell ME to “cut it out.” 2/3

American Airlines told indy100: “Both PreCheck and non-PreCheck screening were consolidated into one open lane. Our understanding is that Ms. Al-Khatahtbeh believed the other passenger, who is enrolled in PreCheck, was getting favorable treatment because he was allowed to proceed through security while she was removing her shoes.”

PreCheck is a membership programme which allows for expedited screening at airports.

Once Al-Khatahtbeh boarded the flight, she was asked to leave by a manager because the unidentified man complained that she made him feel uncomfortable.

She also posted a video of her conversation with the American Airlines manager, who said that they can “discuss that outside” when she argued that he made her feel uncomfortable.

I had the craziest experience in TSA this morning.

An entitled white man behind me insisted on cutting me in line because I was “still taking my shoes off.”

When I said he could wait like everyone else, he started going off about how he’s “pre check” and “first class” 1/3

She later posted a 15-minute video on Facebook which ends in police officers arresting her as she leaves the plane.

Police took her into custody, and she has since been released. She was charged with delay of transportation and trespass.

The airline must immediately explain why it singled out Amani by contacting the police and ejecting her from a flight based on the word of a man who had allegedly harassed her.

The incident has been met with outrage on social media, where people are arguing this is evidence of the Islamophobia that’s still rampant:

However, American Airlines says that onlookers reported that the altercation began in the TSA queue and continued on the plane.Al-Khatahtbeh has sadly been a frequent subject of Islamophobic attacks. Earlier this year, she received a death threat over the phone and posted the recording on Twitter because she felt it was “necessary to see the common experience of Muslims & minorities when hate is normalised by political leaders.”

‘We are actively investigating an incident that took place between two passengers before and during boarding of flight 2029 at Newark Liberty International Airport. We are concerned by these allegations and our team is actively working to learn more about what occurred.”

“We have reached out to both passengers, and are in the process of interviewing crew members, other passengers onboard, as well as witnesses from the TSA checkpoint. In addition, we are working with local law enforcement and have requested video footage from Terminal A and security.”

Child bride, 13, forced to marry 48-year-old man and care for kids same age as her