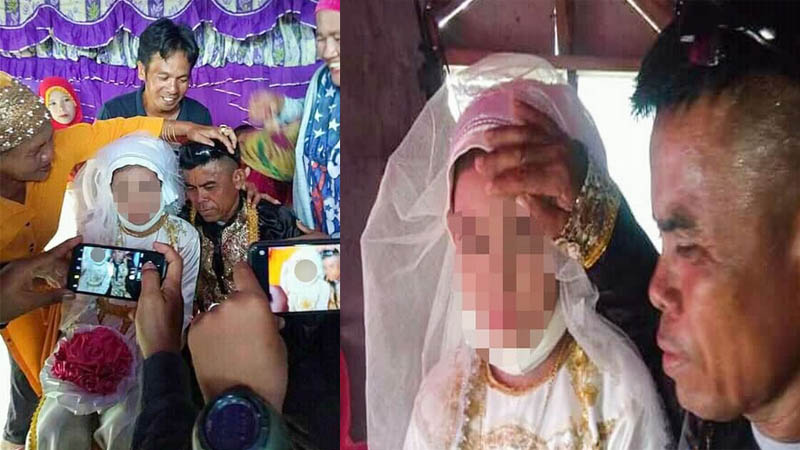 A 13-year-old girl was forced to become a child bride and marry a 48-year-old man in a ceremony.

The teenager wed Abdulrzak Ampatuan, who is nearly four times her age, in the Philippines.

She became his fifth wife after the ceremony last month.

The girl, who Daily Star Online is not naming, will now have to look after his children who are the same age as her.

He said he wants her to get an education and plans to have children with her when she turns 20, MirrorOnline reports.

Photos show her dressed in a white gown during the wedding in the town of Mamasapano on October 22.

They show guests crowding around them during the ceremony and taking photos of them.

Abdulrzak, who works as a farmer while she does household chores and cares for his children from other marriages, recently built a house for them both to live.

He said: “I am happy to have found her and spend my days with her taking care of my children.

“I will pay for her school because I want her to get an education while waiting for the right time to have children.”

Child marriage is defined by the United Nations as any formal marriage or informal union where one, or both, people are under 18-years-old.

The organisation describes it as a “human rights violation”, warning it threatens girls’ lives and health and limits their future prospects.

Figures from the charity UNICEF show the Philippines has the 12th highest number of child brides, at 726,000.

Campaign group Girls Not Brides says its data shows around 15% of girls in the country are married before the age of 18, and 2% before their 15th birthday.

It said: “Child marriage is a human rights violation that we must end to achieve a better future for all.

“Child brides face huge challenges because they are married as children.

“They are deprived of their fundamental rights to health, education and safety.”

Northwest Museum of Arts and Culture