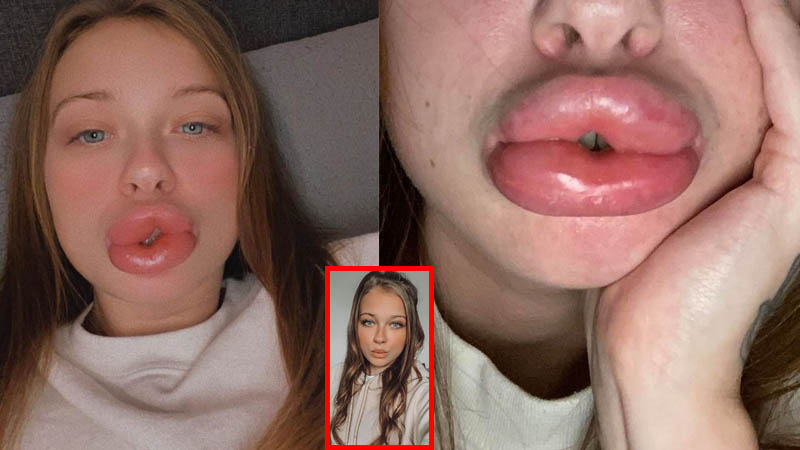 A mum-of-two has issued a stark warning to anyone thinking about getting lip fillers.

Louise Smith has warned people to do their research before getting fillers after her lips ballooned to triple their size.

She shared horrifying pictures of her swollen lips after having the pre-Christmas fillers.

Louise, 25, said she wanted to get her ‘small’ lips filled to boost her confidence, so she booked an appointment at a salon to get 1.1ml of filler.

She said she forked out £80 for the procedure last month.

However her excitement over bigger lips soon turned to horror as she said getting her lips injected was so painful she almost passed out.

She was even more aghast when she saw the results, saying her lips were triple the size and noticeably lumpy and uneven.

The full-time mum is bow sharing her experience to try and urge others to be careful when they get lip fillers.

Louise, from Bognor, West Sussex, said people need to thoroughly research their practitioner before opting for the treatment.

Talking about the experience, she explained: “An hour after getting my lips done they swelled up and then later that evening they were absolutely massive, they were three times the size they should be.

“I knew from the first time I had my lips done that swelling would go down in a day or two and be ok, it was the wonkiness that was bothering me.

“When they went down they didn’t feel any better because they were just wonky and uneven.”

Louise continued: “It was upsetting looking in the mirror and seeing them like that. It looked like I’d been punched in the face quite a few times, they were just horrible.

“I was left with a solid, massive lump a bit bigger than a jellybean on my top lip and another one but bigger on my bottom right lip.

“There’s one the size of a 5p and the rest are about the size of a bb bullet, there are loads of them on the inside of my mouth.”

She said that the lumps are still sore now, and that she’s been told to try and massage them to help slowly get rid of it.

However, she said she’s still in pain because the lumps in her lips are so solid, big and really deep.

Louise opted for the cheap lip filler after spotting a Facebook advert claiming to be from an experienced practitioner who was new to the area and offering a deal in order to boost her client base.

She said she was initially sceptical about the woman’s credentials, but was eventually convinced to get the filler after she was directed to the woman’s Instagram page.

Here the woman had shared before and after shots of clients she claims she’d previously worked on.

Louise said she eventually got a refund, but has been left self-conscious about her appearance.

The mum had had filler in her lips before, but said this experience put her off for a while.

However, after getting them corrected by another practitioner she now feels “so much more comfortable”.