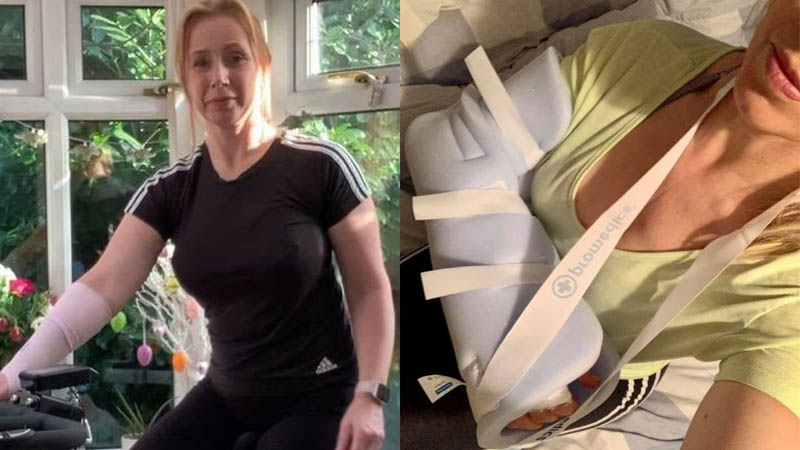 A mum-of-four who tried to pop a blister in her hand was shocked to discover it was a rare skin cancer.

Helen Notley, 46, said she thought nothing of it as she tried to get rid of the blood blister with a safety pin and went on holiday.

But added she “didn’t realise how bad sunbeds were” after she later saw her GP and was diagnosed with nodular melanoma.

She had the lump removed in 2018 but the cancer returned and spread across her body two years later, LeedsLive reports.

The fitness instructor, of Leeds, is now taking part in a clinical trial for a new drug that is proven to shrink tumours in some people.

Helen said: “I genuinely thought I was kind of toughening up my skin for when we went abroad in summer, it’s a big regret, I didn’t realise quite how bad sunbeds were.

“I was genuinely shocked to find out it was cancer, I didn’t think anything of it, it was a real eye opener because I consider myself to be very body aware but I just thought it was something of nothing.

“I was literally trying to cure cancer with a bottle of TP and a safety pin!

“It hadn’t occurred to me at all it was anything dodgy.

“I had it removed in 2018, got the all clear, got drunk and celebrated and didn’t think any more of it.”

But she said “I knew straight away” when she found another lump in her arm.

“This time it was a lot more serious and quite nasty because it meant it was in my system. I had it removed again and had a fairly new treatment called immunotherapy,” she said.

“By September I could see a lot more tumours growing in my arm and after the final lot of surgery, my doctors said it wasn’t working.

“Right now it’s stage 3, it’s confined to my arm and I have regular CT scans to maintain it.

“I am now taking part in a clinical trial for a new drug, it’s not a cure but it has proven to shrink tumours in some people.

“There’s a huge grey area with cancer – people think you either live or die but there’s people like me who are living with it and managing it and I don’t think that is spoken about enough.”

Helen has recently cycled 300 miles in 3 days raising £2,000 for Cancer Research in her latest fundraising project.

She wanted do it in 24 hours similarly to Joe Wicks but her treatment can make her tired so she opted to do it over three days.

In total she has raised £6,000 with various fundraising events in an attempt to “give back.”

This Bombshell About Tiger Woods’ Accident That Just Got Out