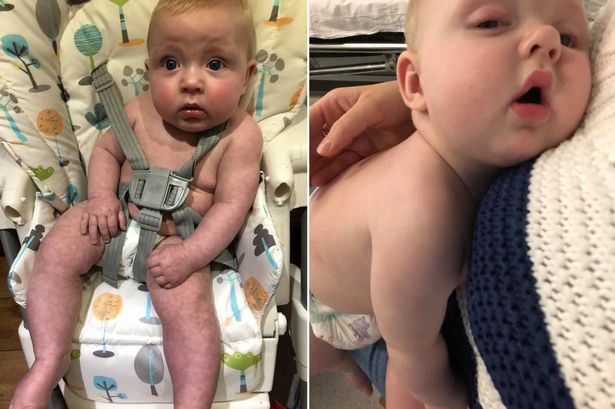 A mum has warned other parents to be on the lookout for symptoms she “had no idea” were linked to Covid after her baby was rushed to hospital.

Myer Rudelhoff said four-month-old George spent three nights in Basildon Hospital in Essex with the mum mistaking his ailments for a common sickness bug or teething.

She said the tot suffered with vomiting, patchy skin, swelling lips and a high temperature, as well as struggling to keep fluids down.

The officially recognised coronavirus symptoms, however, are limited to fever, cough and loss of smell or taste – though some researchers have previously flagged up diarrhoea, vomiting and abdominal cramps in kids.

“I thought it was a sickness bug. I had no idea it was caused by coronavirus,” the mum-of-two told the BBC.

Myer first found little George had a temperature of 39.4 on New Year’s Eve before he began vomiting the next night, with his mum calling NHS 111 on January 2.

The call operator advised the baby be taken to hospital but Myer was initially reluctant, worrying he may catch Covid having “no idea he had it” already.

“He got so poorly so quickly when we arrived and was really lethargic,” she said.

“They took a swab and, when they said he was positive, I burst into tears. It was such a shock.”

Myer said nurses told her they had treated multiple children with the same mottled skin and sickness before encouraging her to share her story to warn other parents.

Dr Kilali Ominu-Evbota, paediatric consultant at Mid and South Essex NHS Foundation Trust, told the BBC George’s family “did the right thing” and urged other parents to seek medical advice via 111 or their GP.