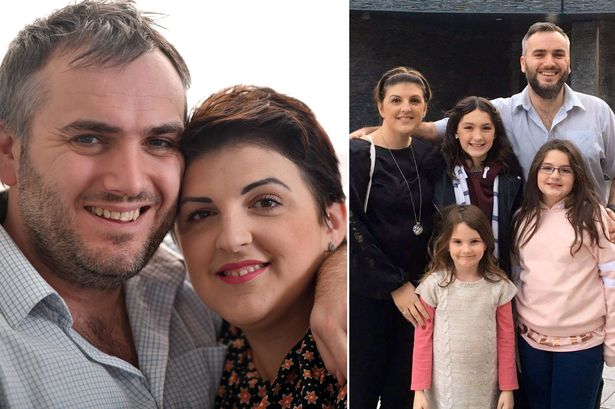 A heart-wrenching has reported that a tragic lady who was teacher by profession has died of breast cancer.

Dawn Marie Wilson’s who was a mother of two kids grieving husband Stephen said “her kids were her life” as he shared their final moments together.

He said it was “tough” being told she had passed away just moments after he left her hospice bedside on October 1.

Heartbroken Stephen, 38, told WalesOnline : “She was a very likeable person. She was magnetic – people seemed to gravitate towards her. She absolutely loved teaching and she absolutely lived for teaching.

“When she passed away her brother was next to her. I had literally just left. I was just getting ready to go to bed when I had the phone call.

“It was tough but it was reassuring to know that her brother was there for her.”
He added: “In the period between leaving her teaching post and going back she missed it terribly. Her kids were her life.

“I have had so many pupils who she taught who would come up to us and say hello when we were shopping in town.

“They all loved her and wanted to say hello and that was something to be proud of.”

Dawn, from Hengoed, Caerphilly, underwent a double mastectomy and hysterectomy after finding a lump in her breast in 2014.

Her health condition were declined day by day buy she refused to give up on life and got breast cancer awareness posters put up in more than 400 GP surgeries in Wales before passing away aged 38.

She leaves behind Stephen, her daughters Imogen, 15, and Madeleine, 12, and his nine-year-old daughter Yvie.

He said: “We travelled through France and Italy. Sulmona was one of Dawn’s favourite places in the world and she had always wanted me to go there.

“In January I decided we would go out there. I didn’t realise it would be the last thing we did together. It was one of the best things we did.”

Stephen said: “Covid made it a lot worse because, initially, they were strict about visitors.