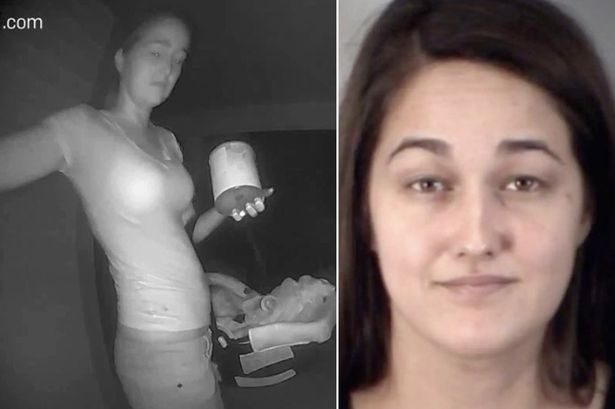 A mum is accused of abandoning her newborn baby son in a dirty nappy on a stranger’s doorstep after her boyfriend broke up with her.

Melissa Kelley has been charged with unlawful desertion and child neglect after allegedly leaving her baby outside the home of the mother of her ex’s new partner in Deltona, Florida.

The 33-year-old allegedly told Patricia Tillman – who she had never met before – her former boyfriend Clayton Zinck would collect the child but he never arrived, according to the Daytona Beach News-Journal.

Ms Tillman told police Kelley turned up out of the blue on Sunday night, telling her not to touch the baby as he had scabies.

The mum is said to have also left an empty bottle and two dirty towels, as well as an opened can of baby formula, before fleeing.

Fox 35 reports the bewildered Ms Tilman then called 911, telling the call handler: “My daughter is dating her ex-boyfriend, or whatever, and she turned back and just left her baby.

“She just pushed the baby in the door and walked away.

The alleged incident is said to have taken place around 10.39pm.

Home security footage appears to show Kelley with her baby in a carrier, ringing the doorbell before walking away.

A police report reportedly states Mr Zinck’s parents were contacted but refused to collect the baby or wake up their son.

The accused is said to have become suicidal after the break-up with Mr Zinck, threatening to kill herself with drugs.

Officers traced the mum’s mobile phone and found her hiding in a wooded area in Astor, in Lake County, around 30 minutes away.

She was arrested, with the baby now in the care of Department of Children and Families.