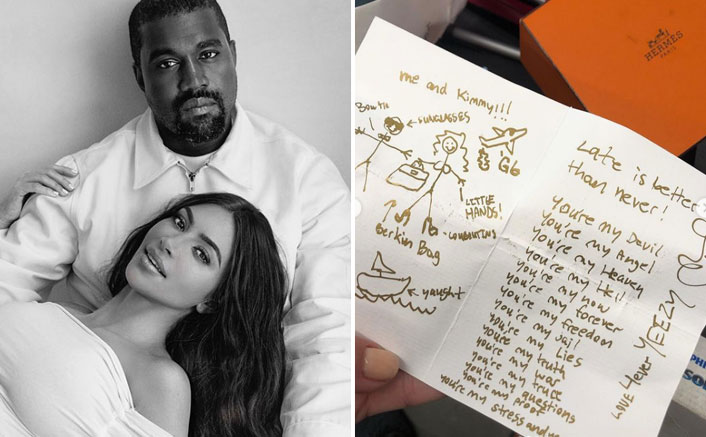 American reality TV star Kim Kardashian has recalled how a birthday card her husband, hip-hop star Kanye West, once wrote for her became the source of lyrics for one of his most acclaimed songs.

In 2010, Kanye released his hip-house experimental number “Lost in the world”, which features in his album “My Beautiful Dark Twisted Fantasy”. The song features the indie-folk band, Bon Iver.

Kim took to her Instagram handle in the early hours of Monday (India time) and shared three pictures with her nostalgic note. The first picture, a black and white frame, has Kanye casually sitting, with Kim reclining on his lap. The other two images are of Kanye’s handwritten birthday card to her.

In the caption she wrote with the pictures Kim Kardashian reminisced about Kanye’s inspiration for the song, revealing a romantic back story.

“Happy 10 year anniversary to Kanye’s ‘My Beautiful Dark Twisted Fantasy’ album. For those that don’t know the story behind ‘Lost In The World’… Kanye couldn’t come up with some of the lyrics but then realized he had then in a poem he had written me that was my birthday card he gave me for my 30th birthday. He took the poem he wrote me and made it the song,” wrote Kim.

Kim ended with the confession that she is quite sentimental about Kanye’s gifts, adding that she has kept the birthday card.

“I keep everything! Swipe to see the card,” she wrote, with musical note emojis.