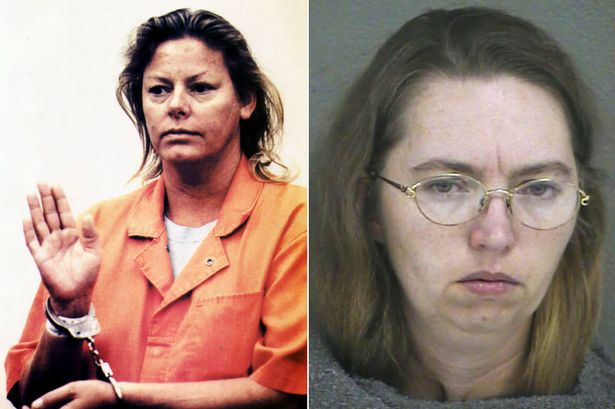 The “womb raider” killer Lisa Montgomery has received a last-minute stay of execution hours before she was to become the first woman killed on federal death row in almost 70 years.

Men commit the overwhelming majority of murders, with women believed to be responsible for approximately 10% of them.

But these crimes often stay in the public consciousness for a lot longer due to the novelty of a female killer, which goes against stereotypical gender expectations.

Women who kill often become the subjects of films, books, TV shows and, in the case of Lizzie Borden, even nursery rhymes.

Here are six of the most notorious female killers of all time.

Born in Michigan in 1956, Wuornos suffered a traumatic upbringing involving sexual abuse and abandonment. At 15 she had already given birth to a baby and was supporting herself as a sex worker.

In 1989 she killed the first of seven men, whom she claimed to have shot in self-defence after he raped her.

Wuornos fatally shot six more men (although one’s body was never found) over the following year, all of whom she claimed had either raped or tried to rape her.

In 1991 she and her lover Tyria Moore were both arrested, with Moore promising to extract a confession from Wuornos in exchange for immunity. Wuornos confessed to the murders in a telephone conversation, maintaining they were all committed in self-defence.

She was sentenced to death for six of the homicides and was executed by lethal infection in 2002.

Her story was adapted into the award-winning 2003 film Monster, which saw Charlize Theron nab an Oscar for packing on the pounds and wearing false teeth to portray Wuornos.

“When she saw what she had done, she gave her father forty-one.”

But whether the Massachusetts woman was actually guilty of the murders of Abby and Andrew Borden is another question.

The elderly couple were discovered in pools of blood in their home, with Andrew’s face split nearly in two and Abby’s head smashed, and a hatchet was found in the basement.

Lizzie, their unmarried 32-year-old daughter, was the only person home beside the housekeeper at the time and she was arrested on suspicion of murder.

Her 1893 court case became an international media sensation, with the prosecution claiming Lizzie had burned a dress similar to the one she was wearing on the day of the killings and bought an axe the day before.

The jury took just 90 minutes to decide she wasn’t guilty – even if the famous rhyme says otherwise.

Dubbed the “Death House Landlady”, Puente ran a boarding house in Sacramento, California in the 1980s.

A former brothel owner who was married four times, she began a relationship with 77-year-old Everson Gillmouth in 1985.

His body was found dumped in a river the following year but was not identified for another three years, during which time Puente collected his pension cheques and forged letters to his family.

She also defrauded various elderly and disabled tenants living in her house, intercepting their mail and stealing any cash or state cheques they received.

When a schizophrenic tenant disappeared, police searched the property and found seven bodies buried in the yard.

Puente was charged with nine counts of murder but only convicted of three, and was handed two life sentences which she served until her death in 2011. Until her dying day, she insisted all her tenants had died of natural causes.

In 2005 police started investigating a string of murders in Mexico City in which the victims were all women over 60 who lived alone and were bludgeoned or strangled to death.

After a witness reported seeing a “large masculine-looking woman in a red blouse” leaving one of the victim’s houses, detectives began to suspect the killer was cross-dressing.

They were stunned when a suspect detained the following year turned out to be an actual woman: Juana Barraza, a 48-year-old professional wrestler known as “The Silent Lady”.

Fingerprint evidence linked her to at least 10 of the murders, and she confessed to four of them but denied the others. She’d posed as a social worker to gain the women’s trust.

Police came to believe Barraza mentally associated her elderly victims with her own abusive mother who had sold her to a man for beer. She was found guilty of 16 counts of murder and sentenced to 759 years in prison.

Known by various nicknames including the Giggling Granny, the Lonely Hearts Killer, the Black Widow, and Lady Blue Beard, Doss was called a “self-made widow” by the media after poisoning four of her five husbands.

In 1954 she also confessed to killing two of her children, her sister, her mother, two grandsons and her mother-in-law.

She was only brought to trial over the killing of her last husband with arsenic, and was found guilty and sentenced to life in prison. She died of cancer in 1965.

Doss always blamed her unstable behaviour on a head injury she suffered at age seven.