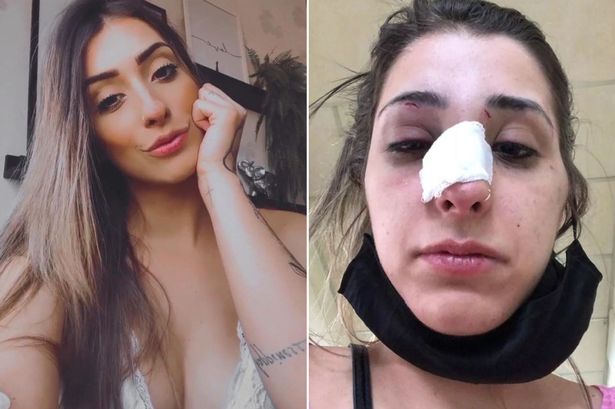 A model claims she was brutally assaulted by her ex-boyfriend a day after she broke up with him, and has shared disturbing pictures of her injuries.

Gabriela Casellato Brito, 24, from Sao Paulo in Brazil, had been in a relationship with businessman Felipe Jose Pereira de Jesus for a year before the alleged attack.

In the last few months, Gabriela claims he became abusive – slapping her and burning her with cigarettes, G1 reports.

After she ended the relationship, she claims Jesus sent her a message reading: “You were very brave tonight”.

On January 17, Gabriela woke up at home with various injuries to her face and struggled to walk.

She claims she found her ex-boyfriend inside the building, who offered to put ice on her injuries.

Gabriela then saw that her apartment door had been broken down, and she rushed to ask her neighbour for help.

She said: “I was in a state of shock. I couldn’t quite understand what was going on.

“When I realised I just thought about running, I was very afraid that he would kill me…I was bleeding a lot.”

Gabriela was eventually taken to hospital, where she was diagnosed with a broken jaw and nose.

She has filed a police report and obtained a restraining order, which requires her boyfriend to stay a minimum of 100m away from her.

Her lawyer Joao Paulo Campos said: “The action was taken with a view to preserving both the victim’s physical and psychological integrity.

“The perpetrator will not be able to keep in touch with her, nor her family members and witnesses, and must obey the minimum limit of 100 meters of distance between them.”

Gabriela has started an online fundraising campaign to cover medical costs for her broken nose.

In December, a woman subjected to a series of violent beatings by her thug boyfriend has shared harrowing images of her injuries – hoping it will stop any other women from dating him.

Seren – who has asked not to reveal her surname – was beaten, strangled, spat on and threatened with a machete knife by her crazed now ex-partner Paul Robert Morgan Richards-Keegan.

The 31-year-old, originally from Cardiff in Wales, began dating the 24-year-old in July 2018 and said it was “amazing” in the first five or six months.

But from that point onwards, she fell victim to Richards-Keegan who imparted a “serious pattern of violence” onto her, which escalated through the first lockdown period.

Neighbours called the police on August 22 after Seren ran out of the house covered in blood.

Richards-Keegan, 24, from Aberystwyth, Wales, was sentenced to four years in jail on December 22 and given a 10-year restraining order preventing him from contacting his former partner.

Marjorie Taylor Greene and her husband received tax breaks on two Georgia homes, investigation says. Married couples are only allowed one, according to state law.