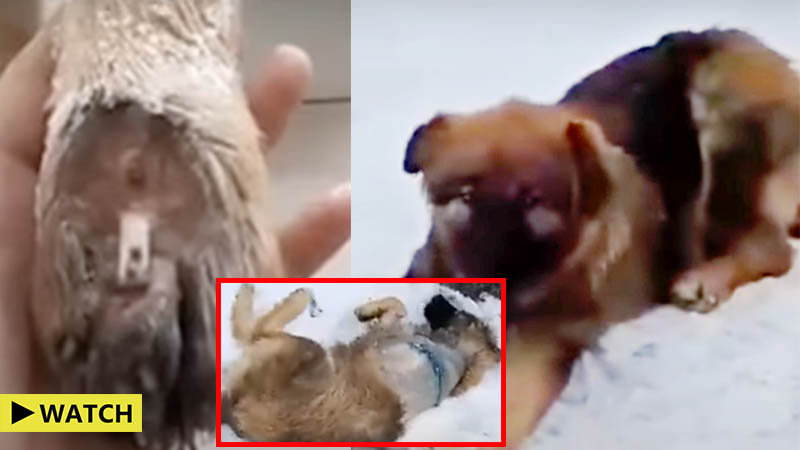 A rescue group received a call about a dog that was in serious distress. When she was hit by a car and had a badly fractured leg, her owner did the unthinkable. He drove her out to the mountains in the middle of a snowstorm and left her there. The poor dog was seen hobbling along by a passerby who thankfully called for help.

When the rescuers arrived, their hearts sank. How could anyone be so cruel and leave her like this? It was freezing outside and she could hardly get around. The rescuers took immediate action. They gently lifted her up and put her into their vehicle. She was so relieved to be inside the warmth!

They headed straight to the vet clinic. Her poor leg was infected. The vet said that this was not a new injury. Her owner let her suffer a long time. What a monster! The vet also explained that the fracture was so severe that he had to amputate her leg in order to save her life. The rescue group was so inspired by the dog’s bravery and sweet nature that they named her Hope.

Hope underwent surgery the next day and did very well! In fact, as soon as she woke up, and the anesthesia wore off, she was eager to eat her first meal. Everyone was so delighted to see her perk up. The vet thought that Hope would need some time and physical therapy to learn to walk but she surprised them all!

Because Hope suffered for so long with that fractured leg, she had already mastered walking on three legs. The new “tripod” dog got around just fine right away. When her energy improved, she even went outside and played in the snow. She couldn’t get enough of it.

Hope will be available for adoption and go to a loving home once she’s medically cleared. She has such a wonderful personality that everyone is certain she will find a home quickly. We are so happy that Hope was found and saved before it was too late. To see Hope’s rescue, scroll on down.