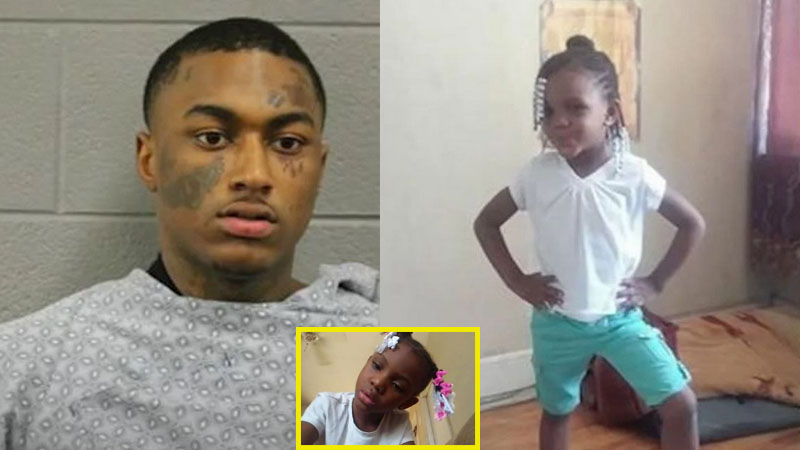 An 18-year-old man is expected to appear in court to face murder charges after a 7-year-old girl was shot and killed in Chicago.

Jaslyn Adams, a first grader, was shot six times as she and her father, Jontae Adams, waited at a McDonald’s Drive-thru on April 19.

Jontae Adams was also shot in the melee which has rocked the city of Chicago over recent days.

The suspect, Marion Lewis, was caught and arrested on Thursday after police had him under surveillance, reports ABC News.

Police have confirmed that they are looking for a number of suspects in relation to the incident, but are not confirming how many.

“We are going to bring you to justice for this crime. The Adams family deserves nothing less.

“We are limited in what we can say because we have other offenders to bring in on this horrific crime.

In dramatic scenes before his arrest suspect, Marion Lewis, tried to getaway from police in a stolen car.

After crashing he tried to carjack another vehicle before firing at officers and then being shot himself by cops in his arm.

In addition to first-degree murder and attempted murder for the killing of Jaslyn and wounding her father, Lewis is also facing a plethora of other charges including aggravated assault on a police officer, robbery, aggravated vehicular hijacking, multiple counts of aggravated discharge of a gun, unlawful restraint and possession of a stolen vehicle.

A McDonald’s employee told police that two men with guns jumped out of a car and fired repeatedly into their vehicle where Jaslyn and her father were. Police reports showed that more than 50 shots were fired.

These included an AK-47 rifle, which matched shell casings discovered at the scene of the McDonald’s shooting.

Believe It or Not, Use Frozen Lemons and Say Goodbye to Diabetes, Tumors, Obesity!

BIAS ALERT: Media Asks Biden Which “Sweets” He’ll Have After Lent Is Over