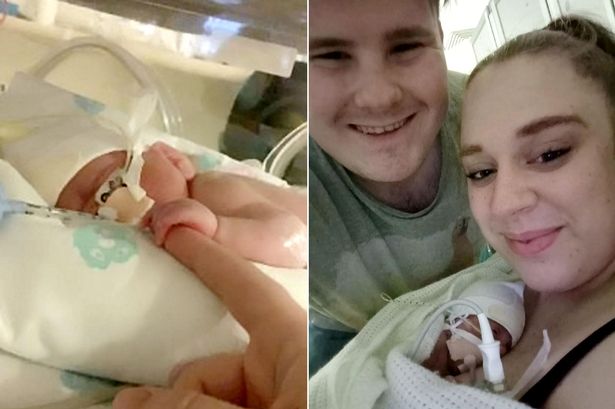 A miracle baby born weighing 1lb 11oz beat Covid, sepsis and E.coli in the first eight weeks of his life.about:blankabout:blank

Archie Edwards was born more than three months early and had to be resuscitated by medics when he stopped breathing.

He was taken to intensive care and put on a ventilator – with parents Sheree Murray and Robert Edwards, both 21, unable to touch him.

Now, his proud mum has praised the NHS medics who saved her ‘miracle’ baby boy.

Sheree said: “I finally got to hold his hand four days after he was born.

“It felt absolutely magical holding his hand – it was scary but magical at the same time.”

Archie caught a bacterial infection that led to sepsis when he was around five weeks old.

And he later tested positive for Covid-19.

“I think that was the scariest part,” said his mum.

“It was scary when he was born but then when they said he had Covid-19, I just wanted a black hole to swallow me up.”

Archie was put into isolation and although his parents tested negative for the virus, they were not allowed to see him for 10 days.

But he battled back to health and after he fought off the virus Sheree was able to hold her son for the first time in weeks.

He now weighs just over 3lb and she hopes he will soon be able to leave the intensive care unit at Burnley General Hospital, Lancs.

A grateful Sheree, from nearby Colne, has thanked the medics for saving Archie.

“I think the care has been absolutely amazing” said the former mental health student.

“Even when they got told he might not make it, they fought harder for him.

“There have been times when I’ve thought to myself he isn’t going to pull through, so he has shocked me quite a few times,” said Sheree.

Because of the pandemic Sheree and construction worker Robert can not see Archie at the same time and take turns to visit him.

Her advice for other parents of premature babies is this: “No matter what you get told, just have hope. They are stronger than they look.

“I’m just looking forward to getting him home.