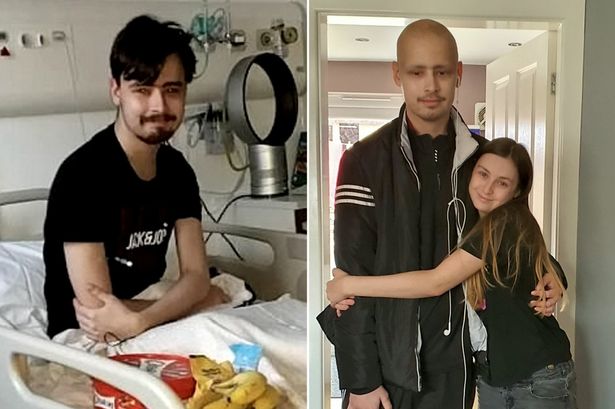 A 24-year-old man has made a miraculously recovery after suffering from brain cancer, sepsis and meningitis within a year.

Nathan Cummings defied the odds after a ‘year from hell’ bringing him to the brink of death four times.

He says he’s grateful to be a live after being diagnosed with a brain tumour which medics believe had been growing his entire life.

Nathan’s tumour caught the attention of doctors after initially believing his symptoms to be related to an ear infection.

He had lost his balance at work in October 2019.

But further tests revealed he had a malignant tumour the size of a ping pong ball.

The 5cm tumour, a medulloblastoma, is most commonly found in children and was in its most advanced stage when he was diagnosed in November that year.

Doctors at Royal Preston Hospital rushed him into surgery where they removed 90 percent of the tumour in a risky operation to save his life.

Nathan’s family prepared for the worst after doctors warned them he “probably wouldn’t make it” as the tumour had grown extremely deep into his brain.

They were told even if he survived the operation, he’d likely be paralysed and lose his ability to speak.

But remarkably, Nathan survived the eight-hour operation and was able to walk within two days which doctors called a “miracle”.

His recovery was short-lived however, as he nearly died after suffering from meningitis on his 24th birthday on Dec 30.

He then suffered from sepsis twice while he was undergoing chemotherapy between January and March 2020.

Nathan then suffered from meningitis again in January this year, before contracting Covid a week later.

But while Nathan said he “doesn’t understand” why he’s been struck with so many illnesses, he has remained positive and urged others to “never give up”.

Nathan, from Blackpool, Lancs., said: “It’s been a really difficult time because I’m catching everything and getting ill all the time.

“I have days where I feel a bit unwell and my mind starts racing because I don’t know how bad it will be.

“It’s been a real year from hell, battling the cancer, the chemo, meningitis, sepsis, and the cataract.

“Oddly enough Covid was the one thing I beat without too many issues.

“It’s been quite a terrifying experience, because I don’t understand why I’m getting so sick and I don’t know when the next illness will come from.

“Why is everything happening to me? I don’t understand.

“But, I want people to know they should never give up, and just keep going.”

Nathan’s grandmother Anne Cummings, 67, said she was heartbroken after he was diagnosed with the cancer as he was “completely healthy”.

She said she prepared for the worst when surgeons took him in the operating theatre in what she described as “pure agony” for eight hours.

Nathan went through 30 sessions of radiotherapy five days a week and two sessions of chemotherapy before coming down with meningitis for the second time shortly after Christmas last year.

Anne said Nathan, who has been losing his memory, couldn’t even recognise her and she thought he had suffered from a stroke.

While he was being treated with antibiotics at Blackpool Victoria Hospital, he tested positive for coronavirus – but said he recovered from it in just four days.

The retired care worker said: “It’s been the hardest year and a half any person could ever go through, but he’s been so strong and I’m so proud of him.

“I prayed for him every night. And we’ve got family, friends and strangers all over the world who are praying for him.”

Nathan is now awaiting results of an MRI scan of his spine as well as liver and kidney tests.

He will have scans every three months to check the tumour hasn’t grown and doctors have told him that if he doesn’t relapse within five years his chances of survival will be much higher.