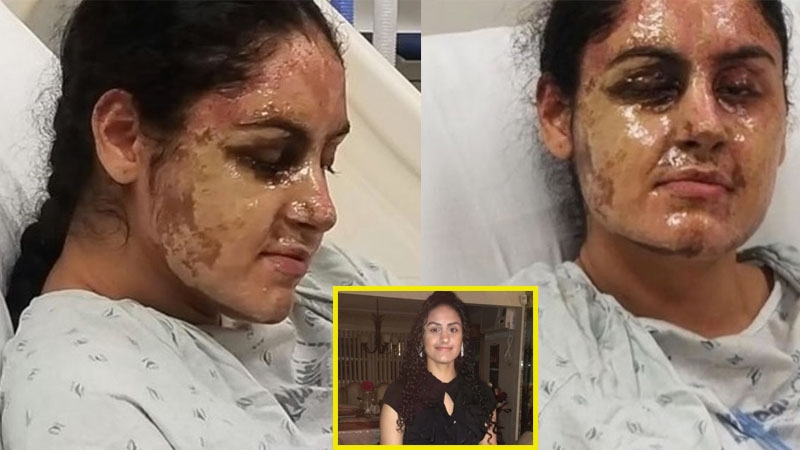 A 21-year-old woman has been partially blinded in a “planned” acid attack that has left her struggling to eat or drink because her throat is so badly damaged.

The attacker threw “a dark coloured substance” over student doctor Nafiah Ikram as she was getting home from work.

Her father, Sheikh Ikram, says that if she hadn’t received help as quickly as she did, Nafiah could have been killed.

“If I was not home if my wife was not home… it would be maybe too late for her to even survive,” he said.

He added that Nafiah has no enemies and he’s baffled as to why she was targeted.

Her attacker – described as a tall slim man wearing a hooded sweatshirt and gloves – approached Nafiah and her mother as they got out of their car in front of the family home in Elmont, Long Island, on March 17.

The assailant threw a “dark-coloured liquid” into her face, causing agonising burns, before fleeing in a red Nissan Altima

Nafiah later told reporters: “I started to cry and, like, I was panicking. I was like, ‘Dad, someone threw something in my face!’ And he was like, ‘Oh my God, it’s acid.'”

“Nafiah was wearing contact lenses that night and the acid melted the contact lenses onto her eyes. We don’t know if Nafiah will ever regain vision again.”

Nafiah’s dad works for celebrity chef Padma Lakshmi, who posted: “This is every parent’s worst nightmare. Nafiah’s medical costs will be astronomical.”

Friends of the family have launched a GoFundme to help pay for her medical expenses. At this stage, it’s not known whether she will ever be able to return to her studies at Hofstra University.

“My whole life changed in a matter of five minutes,” she said.

“We don’t realise what we have until it’s gone.”

Police are still searching for the assailant and the motive for the hideous attack remains unknown.

While the family does not believe Nafiah was targeted in a hate crime, they have no other theories.

“My wife, she sleeps with her every night.”