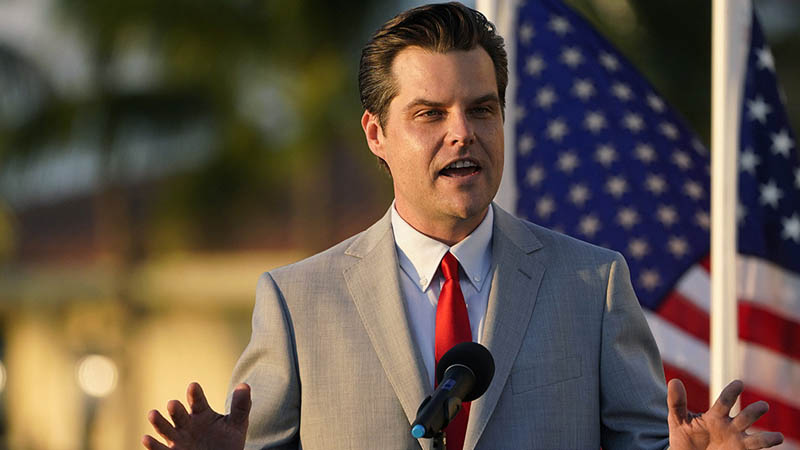 olitico obtained WhatsApp messages from Joel Greenberg, the former “wingman” and friend of MAGA Congressman Matt Gaetz after his arrest last June on a flurry of criminal charges. Gaetz used to brag about women he met through Greenberg, and now it appears that his former friend might flip on him. Before his federal charges, Greenberg — a former Florida tax collector — was accused of abusing his office and wasting taxpayer funds.

According to the Orlando Sentinel, Greenberg is now facing over 30 federal charges, including sex trafficking of a child, aggravated identity theft, creating fake IDs, wire fraud, illegal monetary transfers, and conspiracy to bribe a public official to defraud the Small Business Administration for COVID-19 relief funds.

Politico reports that Greenberg was in a panic.

“The Florida county tax collector was five days away from a federal indictment for sex trafficking involving a 17-year-old — the same one Gaetz is now being investigated over — so Greenberg reached out to mutual friends on Aug. 14 last year and tried to enlist them in his defense, according to a WhatsApp chat shared with federal investigators and obtained by POLITICO,” the outlet reports.

“He fretted that investigators had combed through his Venmo cash app history, fearing it led them to the former teen at the center of the case,” the report continues. “Greenberg also said he was paying the legal fees for the woman, who is now 20 years old.”

“In the Aug. 14 WhatsApp chat with a politically influential Republican mutual friend of Gaetz and Greenberg, Greenberg initially referred to the young woman as “Vintage 99” — a fine-wine reference to her birth year that she used as her online name on SeekingArrangement, a dating website that connects women with so-called sugar daddies,” the outlet reports.

“I’m having to pay for vintage 99 to retain [a] lawyer,” Greenberg wrote in the WhatsApp chat to the friend, who discussed the messages with the outlet on the condition of anonymity. “They [federal agents] contacted her and are wanting her to talk. She doesn’t want to talk to them.”

The WhatsApp messages to his friends are very telling.

“I’m trying to let everyone know who came into contact with any of these girls that the feds are going through my Venmo history and don’t want anyone to be caught off guard,” Greenberg wrote to his friend, who quickly replied to say that he wasn’t on Venmo, had no such history with any of these women and begged him to “absolutely positively leave my name the f— out of any of this. I’m serious about this, Joel.”

Greenberg also messaged his friend to say that “everyone is going to need a lawyer.”

“I have nothing to do with any of this and think it is incredibly uncool you are trying to lawyer me up to be a part of it, Joel,” he wrote back in a WhatsApp message. “Not. F—ing. Cool.”

‘Bubbly’ student, 17, dies hours after she claimed she was raped at party