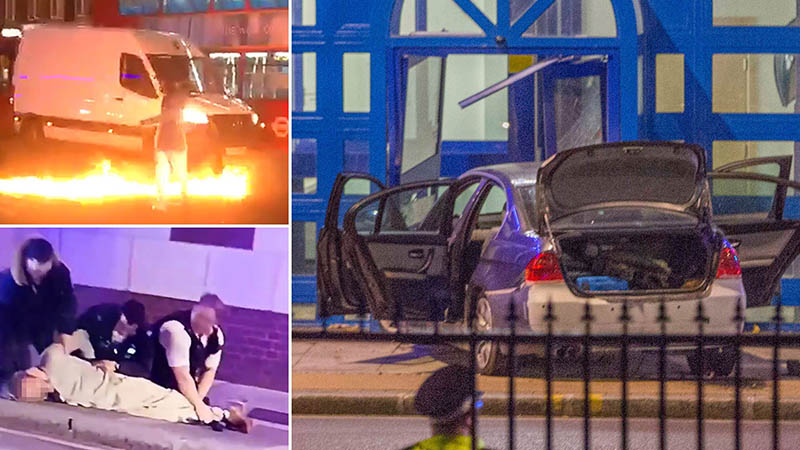 A man has been arrested after driving his car into a north London police station.

Several police cars have been pictured outside Edmonton Police Station in Enfield, which was afterwards evacuated.

A cordon has been set up at the scene as the Metropolitan Police begin an investigation, and the public have been told to avoid Fore Street.

The force confirmed in a statement: “At around 6.58pm on Wednesday, November 11, a vehicle collided with the station office at Edmonton Police Station.

“A man – no further details – has been detained in connection with the incident. The vehicle remains at the scene. Specialist officers are in attendance while it is examined.

“At this stage we have not been informed of any injuries.

“The police station has been evacuated and a large police cordon is in place.”

Footage has emerged on social media of a man pouring petrol onto the road before setting it alight.

Officers were also recorded tackling him to the ground.

“If you’re in the Fore Street area stay safe and be careful.”

Twitter user @DoubleDeka wrote: “So I drive home from work and see a car intentionally crash into Edmonton Green police station and then the same man tried to set a fire. All hell broke loose and now my street is locked off.”

@ModernDayJFK posted: “Someone just drove into the station couldn’t get past the second set of doors then attempted to set the car and surrounding roads on fire.”

Met Police have said in a statement that the incident is not being treated as terror-related.

Millie Bobby Brown Is All Set To Play Princess Elodie In Netflix’s Next Plus There’s A Surprise!

The government Donald Trump left behind

Biden Faces Challenge From Surge of Migrants at the Border