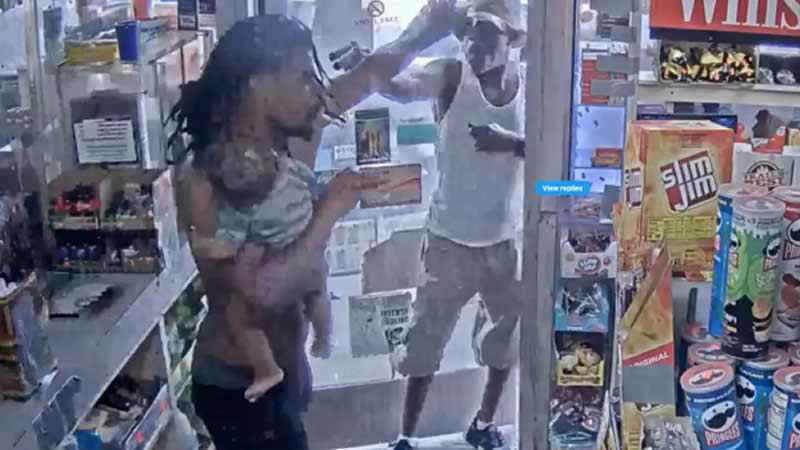 There is a video on the internet showing a man pointing a gun at a father who was holding his baby in his arms at a gas station in Detroit. In the video, the father instantly stopped the gunman from shooting at him.

The Daily Mail got the details;

A shocking surveillance video shows the moment a Michigan man pulled a weapon on a father holding his sleeping baby at a gas station in one of the most crime-ridden cities in America.

The father quickly reacts, waving his arms in front of the gunman in an attempt to grab the weapon during the altercation at a Detroit gas station Sunday evening.

The suspect then steps out of the store and is seen fiddling with the firearm in the parking lot. Investigators believe the gun may have jammed when the father attempted to grab it.

The wild video is now part of an aggravated assault investigation and police have taken a person of interest into custody.
Investigators believe the suspect targeted the father after an argument ensued between the pair, although it’s unclear what the argument was about, and if they knew one another prior to the tiff.

The unidentified suspect walked into the gas station store at the corner of Hubbell and Tireman Avenues in broad daylight on Sunday around 5.50 pm.

As per independent, the fact that the gun jammed indicates that he was ready to kill the man in broad daylight. There are too many guns in our society this shouldn’t be happening on a daily basis.

You would assume that these are war-torn nations, not the United States, yet every day it becomes clearer that we are no better than those nations.

We might be even worse in some circumstances. Thank goodness the gun jammed and the baby was sound sleeping throughout. Terrible times in the country.