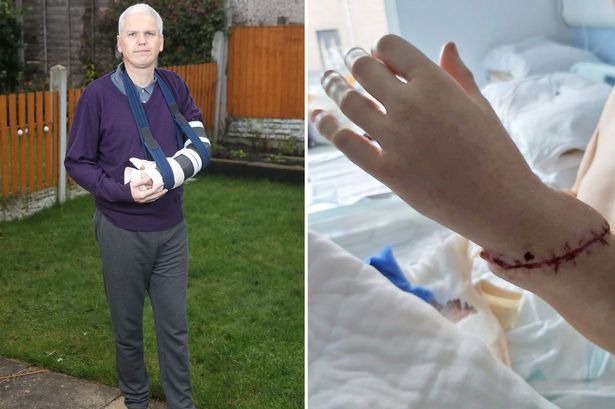 A DIY fanatic chopped off his hand after being pulled into a high-powered mitre saw by his loose-fitting hoodie.

Jason Merritt, 49, was in his garden chopping up an old shed for fuel for the wood burner when the freak accident happened on Friday the 13th last month.

He became trapped in the heavy machinery, with his left arm still attached to the saw with just millimetres of skin and nerves.

The security officer, of Leeds, West Yorkshire, said it all happened so fast that he is still not sure what caused it.

He said: “All of a sudden there was some kind of pulling in and then I could see my hand had come away from my arm.

“I was just looking at my hand on the table and my heart plummeted, and I just thought, ‘Oh Christ’.”

He added: “I was wearing a hoodie, so I think maybe that had been caught in it somehow, but I just don’t know really.

“It all happened so fast.” 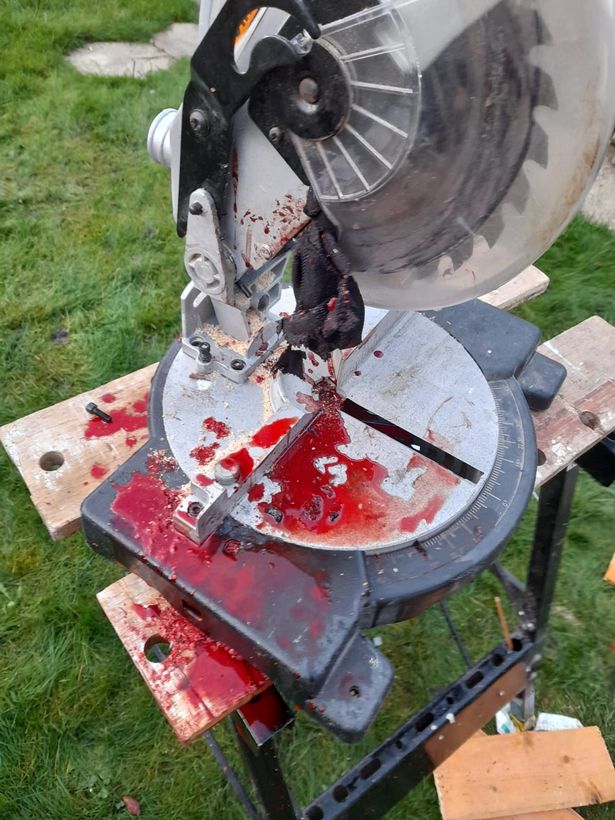 The step-grandad, who celebrates his 50th birthday on Friday, was stuck and all he could do was to shout for help.

A neighbour jumped over a shed and into his garden, where he rang Jason’s wife, radiographer Elaine, 64.

The emergency services, including an air ambulance, quickly arrived at the scene and police went around asking neighbours for ice to pack his hand in.

Jason was given heavy pain relief to knock him out so he could be freed from the machinery in an hour-long delicate operation, before being taken to Leeds General Infirmary.

Surgeons reattached his hand in a complex eight-hour operation.

He lost 2cm from his arm where it had to be cut to create a smooth surface for reattachment.

It was then plated back together, with intricate work carried out to reattach nerves, muscles, tendons, arteries and veins before being stitched back together.

He was eventually sent home six days later where he is recovering.

Medics have told him it will take 18 months to two years for the nerves to grow back.

Jason said: “I will be forever grateful to all of those who took part in saving me, from the guy who jumped over the fence, to all the emergency services who worked efficiently and speedily to save me.

“I dread to think what could have happened if nobody had heard me. I could be here without a hand, or it could be even worse.”

Mum-of-two Elaine said the saw “will be going to the tip,” adding: “We will not be using that again.”