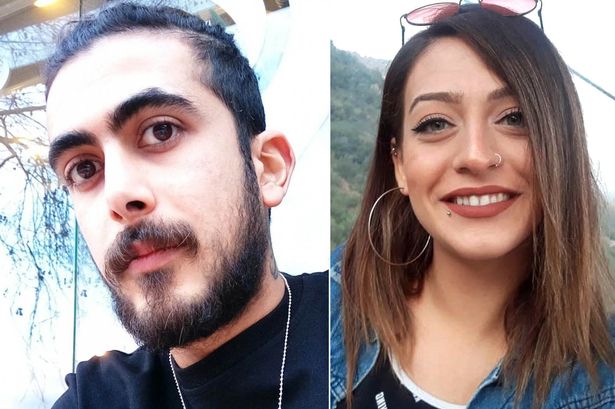 A jealous ex who allegedly killed his girlfriend after she dumped him has taken his own life behind bars.

Shayan Kheyrian, from Iran, was living illegally in Turkey for two years when he started dating Aleyna Yurtkolesi.

But when the 22-year-old dumped him, he refused to accept it and continued to pressure her to get back together with him.

When he realised he wasn’t getting anywhere, he turned up at her home wearing a face mask and rang the doorbells until one of the fellow students opened the door – believing he was a courier.

The 25-year-old is alleged to have then walked to her room and strangled her to death in her bed, at the dormitory on 6422 Street in the Yunusemre District in Denizli, on January 9.

Despite his face being covered, police were able to identify him by the Arabic tattoo on his neck which CCTV cameras picked up.

He was arrested for murdering Aleyna, and local media reported he confessed to the crime, saying he had gone to see her to make peace but they ended up having a row and he suffocated her.

A close friend of the victim, Berkan Acar, said: “She was such a sweet person. She really was an angel. She lived in her dormitory alone and was really quiet.

“I met her only recently and we chatted and joked, and it seemed like she had everything to live for. Yet tragically, she is murdered and we are all devastated.

“It’s so sad that we couldn’t do anything, I live opposite and I didn’t notice anything. I wish I could have heard something and gone to help.”

Police say that her alleged killer took his own life in his cell by hanging on the evening of January 13.

Prison officials said that it was a suicide and confirm that his body had been taken to the morgue of Pamukkale University Hospital Forensic Medicine Institute for an autopsy.

Ben Affleck On People Being Mean To His Ex-Gf Jennifer Lopez: “Ugly, Vicious s*** Was Written About Her…”