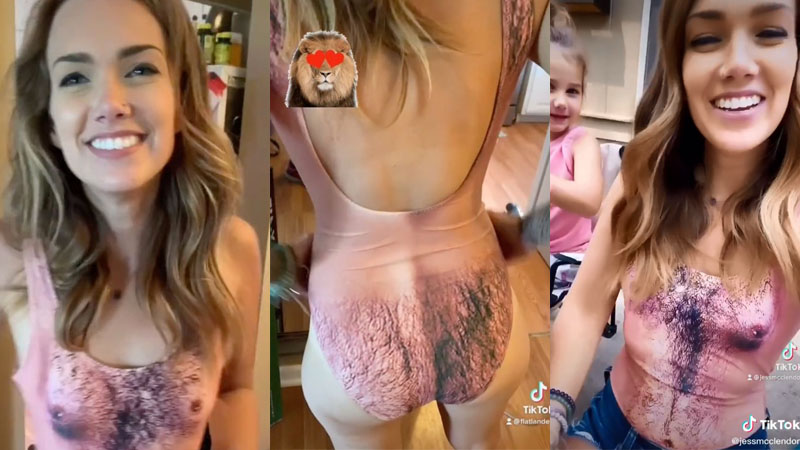 In a video he uploaded on TikTok, user @flatlanders can barely speak through his fit of laughter when his wife Jessica McClendon @jessmcclendon tries on a nude swimsuit.

The bizarre piece of clothing has a very hairy pattern – with thick black fur appearing to sprout out over the chest, nether regions, and even the buttocks.

It looks so funny that Jessica can’t stop laughing either and the couple howl as she twirls around.

Her husband wolf-whistles and she asks: “What do you think? Good?”

“Great,” he replies through what sounds like tears of laughter.

In the caption, he joked his wife had “got a new swimsuit but we are gonna need new lawn trimmers”.

Unsurprisingly, the clip went down a storm on the video-sharing app, with more than 235,000 views and thousands of comments.

Many people joked they’d be buying their own girlfriend the very same swimsuit.

One person commented: “My stomach is hurting from laughing so hard I just can’t.”

“Congrats to the dude that has a woman like this! That’s awesome,” said a second viewer who appeared to like the joke.

A third said: “What a great sport she is, way to go making something good ole fun!”

Someone else said: “That’s so funny but she’s so beautiful.”

Meanwhile, other people seemed to caution against wearing the cossie and some even thought she could get into serious trouble.

“If the hair matched better you might get arrested for that,” wrote a user.

“Never leave the house with that on,” pleaded another.

This comes after a bride’s wedding dress sparked a lot of questions when a truly bizarre tattoo was spotted poking out of the top of the bust.

Apparently, couples are happiest when they have Love once a week