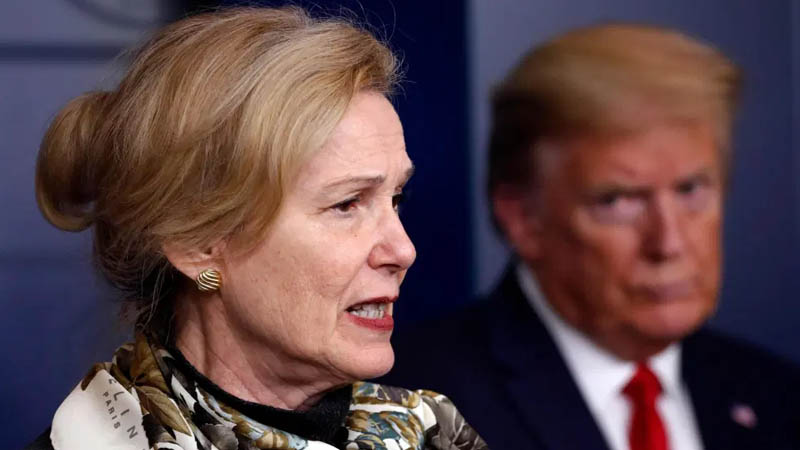 Today I was planning to take you with me on some in-depth investigative journalism into how and why we failed to better curtail the COVID-19 mass-killer. But, searching NBC’s website, I have stumbled across something that doesn’t look like breaking news, but seems more like spot-on satire worthy of “Saturday Night Live.”

It is dated March 25, 2020, and is a network anchor interviewing a person identified as Dr. Deborah Birx, President Donald Trump’s coronavirus task force coordinator. The interviewee is standing in front of a White House backdrop, is wearing a Birx trademark colorful scarf, and is being asked an ideal satirical setup question: How is Trump doing behind the scenes in dealing with the COVID-19 crisis?

Well by March 25, 2020, we already had a pretty good idea about that. A month earlier, Trump had told us America’s few COVID-19 cases would soon “be down to close to zero” – instead America already had more than 85,000 COVID-19 cases. Trump was also repeatedly saying he wanted to reopen the country and fill church pews by Easter Sunday 2020. And we also knew that Trump hated detailed policy briefings. Also, his briefers figured out long ago that they needed to insert his name frequently into written material – just so he’d keep reading it.

But here on this video that popped up when I searched NBC, the person introduced as Birx was saying just the opposite, effusively and excessively. Her words sounded like biting scripted satire. She even was portraying Trump as a biz wiz who digs detailed “granularity!” Ha! Here, listen for yourself to her complete answer:

“He’s been so attentive to the scientific literature and the details and the data. And I think his ability to analyze and integrate data that comes out of his long history in business has really been a real benefit during these discussions about medical issues. Because in the end, data is data, and he understands the importance of the granularity.

And I think he’s been really excited about finding the level of detail that we’ve been able to now bring over the last few weeks to really understand who’s at the greatest risk for severe illness, who will have mild and asymptomatic disease, and really calling on every American to do that social distancing, because some people may not know they’re actually infected and be unknowingly spreading the virus. And that all comes from the president seeing the data and really directing these policies and these guidelines that go out to the American people.”

Uh-oh! TIME OUT! Boy is my face red! Apparently in my rush to search “NBC,” I typed it backwards – “CBN.” So we weren’t watching some “SNL” satire on NBC. We were watching the real Dr. Birx being interviewed on CBN – the Christian Broadcasting Network. So the highly regarded and decorated medical doctor, whom we trusted all year to give us the straight-talk news we needed to know, had actually dished us that gush of effusive praise about her boss, our president.

So there is absolutely nothing funny about Birx’s words when they are lit by the spotlight of reality. But the bright light reveals a perspective we need to factor into some heartbreaking breaking news we recently saw. Last Sunday, at a time when more than 550,000 Americans have died from COVID-19, Birx said on a CNN documentary that America might have saved hundreds of thousands from dying of COVID-19 if we had just firmly persevered with our pandemic restrictions mandating masks and safe distancing.

“The first time we have an excuse,” Birx said. “There were about a hundred thousand deaths that came from that original surge. All of the rest of them, in my mind, could have been mitigated or decreased substantially.”

But wait. What she is really explaining to us is that every time she misled us into thinking our president was not just competent but excellent enough to be trusted in mid-pandemic, she was doing a disservice to us all. That includes her words on March 25, 2020, and ever since. She knew better than she spoke. She and her colleagues who feared to tell us the whole truth about our president gave Americans a false sense that they could trust our president’s word.

Even when Trump and his team urged them to attend campaign events maskless and massing in close contact. Even when, this past month, they failed to warn Americans that Republican governors who rushed to reopen their states too soon – and allowed spring breakers to frolic and spend money in their states.

Fearful of incurring Donald Trump’s wrath, they became complicit in a cause that sent hundreds of thousands of Americans to their doom.