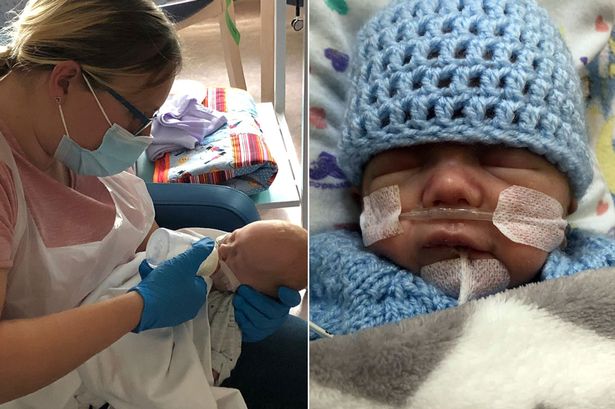 For nearly two months new mum Vicki Burton could only kiss her precious baby through a mask and touch him wearing gloves.

Little Max suffered a bleed on the brain when he was born 11 weeks prematurely during the first Covid wave in June.

Mum Vicki, 30, and dad Chris, 41, were allowed to see him in the neonatal unit at James Cook University Hospital in Middlesbrough for just two hours a day.

And during those short visits they always had to wear a mask, an apron and gloves.

There were no cups of coffee with other parents going through similar ordeals.

And definitely no comforting hugs from staff on the unit.

Vicki said: “All we could do was go in and feed him once a day, maybe change a nappy.

“I didn’t feel like I was his mum. It was really tough.

“Some days if he was sleeping and we didn’t want to disturb him, we didn’t even get a cuddle.

“Only one set of parents was allowed in at a time, so we couldn’t speak to any other baby’s parents. You felt so alone, as if you were the only one going through this.”

And that’s where the charity Leo’s Neonatal – which supports families through traumatic births – stepped in to help.

Vicki was put in touch with the charity’s founder Lottie King – who knew exactly what Vicki was going through after losing one of her twin boys at just four hours old in 2015.

Vicki said: “Lottie would phone me once or twice a week and I can’t tell you how much it helped speaking to someone who had been through it too.

“I didn’t feel alone any more. I felt like I could cope.”

Leo’s Neonatal has seen a three-fold increase in demand since the coronavirus pandemic broke due to parents struggling to cope with restrictions on visiting their sick babies.

Some hospitals only allow parents to visit for two hours a day, others permit unlimited visiting but only for one parent at a time and no hospitals are letting in siblings or grandparents.

And thanks to £30,000 from The National Lottery Community Fund, the charity has been able to launch a new project – the first of its kind – offering therapeutic trauma support to neonatal families in the North East affected by Covid-19.

In its first month the Nurture Project has already helped 70 families coping with issues such as PTSD, anxiety and depression.

And the Burtons, from Stockton-on-Tees, Co Durham, are one of the families benefiting from the project.

Since Max was discharged from hospital aged nine weeks, he has been going from strength to strength thanks to the activities on offer.

“I didn’t have a clue what I should be doing to help him, but Leo’s Neonatal have taken care of that for me and taught me so much.

“I don’t feel alone any more, I feel part of a community. I’m just so grateful.”