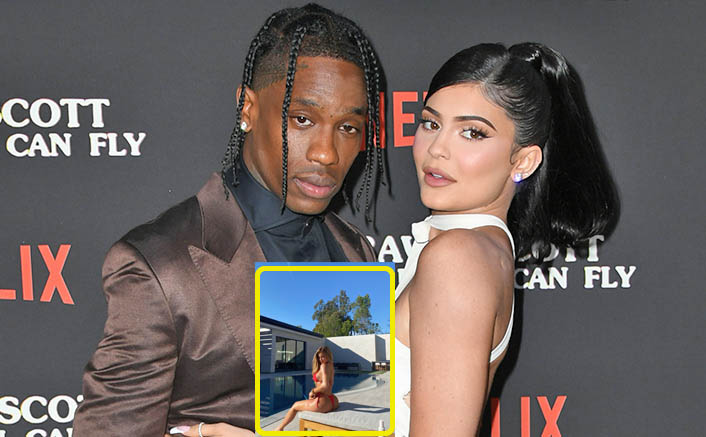 While they may not be back together but the flirty vibes between Kylie Jenner and her ex Travis Scott is grabbing all attention. This is not the first time when we see the two flirting on social media. Well, after yet another episode of flirting, fans are left to wonder, what is going on?

Everyone is only wondering that are these two still a thing? Well, it may look like it with the way Travis is flirting with Kylie.

Travis Scott could not hold himself back from commenting on Kylie Jenner’s post after she put up a picture of herself in a red bikini. The Franchise rapper was clearly loving the super s*xy red bikini photos that she posted on Wednesday, Nov. 18 along with 11 million others who double-tapped the gorgeous photos.

“Heavvvyyyy,” he wrote, which Urban Dictionary describes as meaning beautiful or sexy. He added two swimming emojis and a water drop, suggesting the photo was making him sweat. Well, we cannot blame him.

In the photos, an oiled up Kylie Jenner, thanks to her Kylie Skin SPF sunscreen. She channelled a Baywatch era, Pamela Anderson! Of course, Pamela. Showing off her blonde hair and curves, Kylie posed up a storm in a skimpy red two-piece at her resort-style $36.5 mansion in ritzy Bel-Air, California. With her golden tan on full display, she looked like she had been chilling by her spacious pool for a minute.

Check out the pic below:

As for Travis Scott and Kylie Jenner, the flirty vibes have been on-going since the couple’s split over a year ago. The pair still spend plenty of time together as they co-parent their daughter, Stormi, with many fans hoping they will reunite romantically. Previously, sources have told us that the exes act together when they are alone, in addition to sneaking away for private dinner dates over the summer months.

If This Sounds Like You, Dr. Fauci Says You’re at Risk for COVID

‘I could only touch my little Max in a mask, apron and gloves for two months’