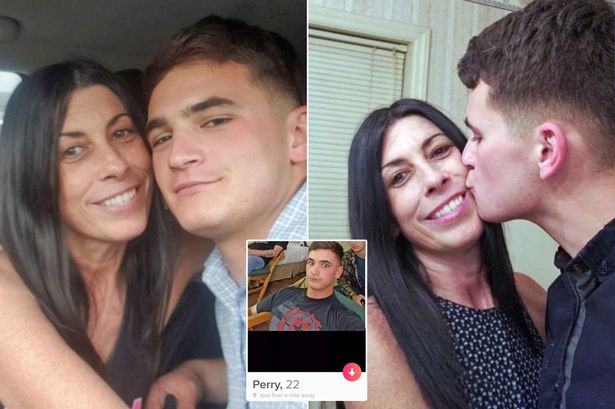 A gran-of-three has explained that her fiancé is a massive 28 years younger than her.

Now, the couple, from North Carolina in the United States, plan on being married this year.

Sharon, a school teacher, said: “I may be old enough to be Perry’s mother, but I won’t let that stop me from chasing happiness.

“Perry and I know we’re meant to be together and we don’t care what other people think.”

She explained: “In the last year of our relationship, I found myself stealing glances at men in their 20s whenever we went out.

“I vowed to find someone more suited to my spontaneous personality.”

And, in 2020, Sharon’s dreams came true when she met Royal Marine, Perry, on Tinder.

The grandmother said: “I’d lowered the age range down to 19.

“I scanned Perry’s profile and realised he was 22, which made him 28 years younger than me.

“He was also younger than my three kids.

“I told him how I was a grandmother but he didn’t care.”

The pair flirted for a few days until Sharon invited him over to her home.

She added: “He was even sexier in real life.

“Even though we had such a large age gap, Perry was an old soul.

“Thankfully, my 23-year-old daughter who lives with me was fine with it.”

In fact, Sharon’s daughter jokes about the situation and even calls Perry “kid”.

Sharon continued: “Due to the Covid-19 pandemic, Perry moved in with me straight away.

“It was fast, but I was the happiest I’d ever been and it just felt right.

“Admittedly, sexually, mine and Perry’s age gap was a kink.

“But it wasn’t just about that.

“He was romantic too.”

Despite being accepted by family –including Perry’s mum– and friends, the pair do sometimes get dirty looks from strangers.

She explained: “It was really weird at first but we soon began to laugh it off.

“Then one day, we were out shopping and I gave Perry my bank card to pay for something while I rummaged through my handbag.

“The cashier said, ‘You can’t let your son use your card.’

“After that, people constantly confused Perry for my son whenever we for dinner or shopping.”

Sharon added: “I don’t care about a silly number.

“It’s the person who Perry is that I fell so deeply in love with.”