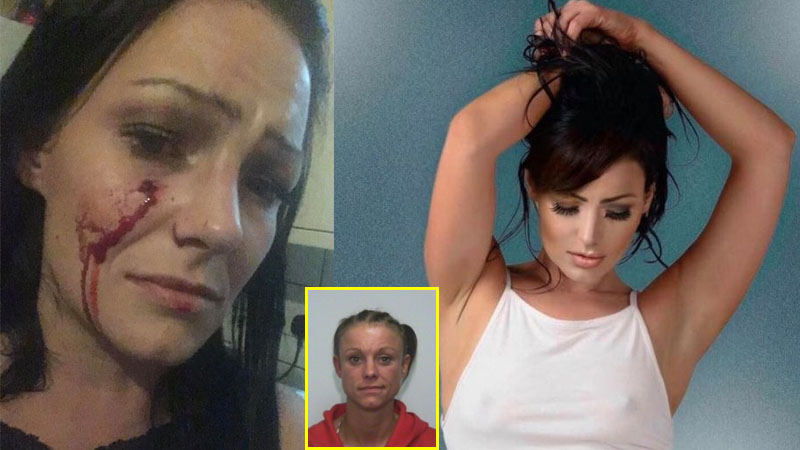 A glamour model has been left scarred for life after she was stabbed with a screwdriver by another woman in a revenge attack.

Stacy Dolan, 38, suffered a puncture wound to the left side of the face below the eye, a 1cm laceration on the left knee, and bruising and swelling to the upper right arm after the attack.

She was stabbed by 49-year-old Sharon Mather, who had confronted her inside her own home and accused her of “taking advantage” of a friend who gave the victim money.

Now Ms Dolan, who has posed for a string of publications including Front magazine, Twisted Edge and the Daily Sport, claims she is disfigured and can no longer pose for close up facial pictures due to a scar on her lip.

The mum of two, from Wigan, Greater Manchester, said: “Since the incident, it has affected my confidence and the way I am.

“It has made me more conscious of being alone. I now no longer use my front door to enter or leave my house.

“My injuries have healed but the injury to my face has left me feeling like I have nerve damage to my top lip, it feels like I always have a fat lip.

“There is still a slight scar that can be seen close up but can be covered with makeup. However, I am aware of the fact that I have this scar and I am now really conscious of it.

“I am also conscious of how this has affected my modelling career and I know now that I can no longer accept work that requires me to have close up face shots.

“I have two small scars on my leg that I am conscious of. I also feel the scar on my face may have lost me work.”

Mather, a former carer, was jailed for five and a half years at Bolton Crown Court after she was convicted of causing grievous bodily harm with intent.

The jury heard Ms Dolan and Mather fell out in July 2019 when Mather believed Miss Dolan had taken money from a mutual friend.

In the early hours of July 13 that year, Mather went round to Ms Dolan’s home and the attack followed as one of the victim’s young kids slept upstairs.

Mather denied GBH but was convicted following a trial. She was acquitted of aggravated burglary.

Sentencing the thug, judge Miss Recorder Alexandra Simmonds told her: “You had a screwdriver in your hand, you struck out at her several times causing three wounds. It was the final injury to her face that perhaps brought you to your senses as you then fled the property, realising what a terrible thing you had done.”

“She was a child” – WH blames police officer for killing of Ma’Khia Bryant in Ohio, which is NOT true – [VIDEO]