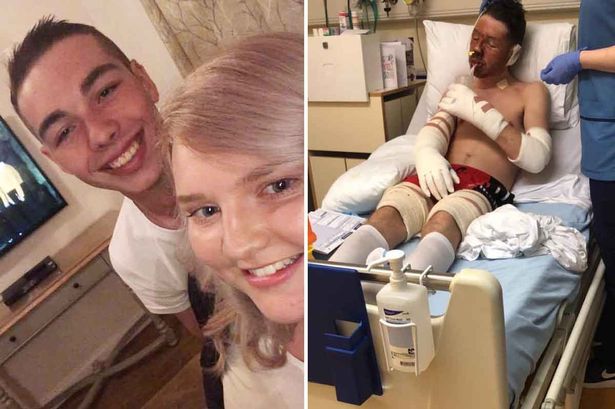 A welder saw his skin and clothes melt off his body after he was thrown 9ft in the air during a fireball explosion at work.

Dean Beggs, 23, opened a container while a propane torch was lit and was hit by the ferocious blast.

He says he “died” three times during the ordeal which left him with horrific burns, physical and mental scars, the Daily Record reports.

The firm, A&D Logistics, in Linwood, Renfrewshire, admitted health and safety breaches at Paisley Sheriff Court and was fined £48,000.

Dean, a team leader at the company in January 2019, opened a container while a propane torch was lit and was hit by the ferocious blast, which hurled him across a yard.

He said: “I remember flames coming towards my face and it blew me away back against the container at the back of me.

“I remember lying down next to this container and thinking, ‘That’s it, my time is up.’

“My eyes were closing but it was because my eyelids were singed shut. I couldn’t get them open.

“I started to run but then it was walking and then crawling. I couldn’t breathe.

“I managed to start screaming.”

Dean, a trained spray painter, panel beater and welder, said his colleagues told him to roll in a puddle to ­extinguish the flames.

But he said: “There could’ve been diesel oil or anything in the puddle.

“I remember thinking, ‘I’m either going to burn to death or die from catching a disease.’

“The guys formed like a conveyor belt, bringing fresh water in wee cups from inside the depot, that they were throwing on to me to put out the flames.

“I lay in the puddle until the ambulance came, I’ve never been so numb in all my life.”

Paramedics gave him medication and a blanket covered in Vaseline.

Doctors thought he would need at least eight weeks in intensive care, but he left after three.

He said: “I did all the physio I could and put myself through the pain.

“I was covered in bandages, I couldn’t go to the toilet properly, I was fed through a tube.

“Getting the bandages changed was worse than being on fire. It’s like a cheese grater getting ripped down your skin.

“My blood was burnt, my scalp was burnt, I had no hair, I was bald. I died three times in intensive care.”

The damage to his hands, which are now “mostly scar tissue”, left him struggling to find a job.

He recently started working as a Tesco delivery driver.

Dean, who suffers from post-traumatic stress disorder, thanked his fiancee Katleigh Mcdonald for helping him cope and supporting him by switching jobs.

But he blasted the firm, which he said has “never once apologised”.

In a ­statement, the business said: “A&D Logistics Ltd sincerely regret that this accident took place and resulted in serious injuries to Mr Beggs.

“The company accepts responsibility for not ensuring a specific process was in place at the time for the task of drying the container.

“The company takes health and safety very seriously, co-operated fully with the HSE investigation and immediately implemented procedures to ensure that particular work activity was not carried out again.”