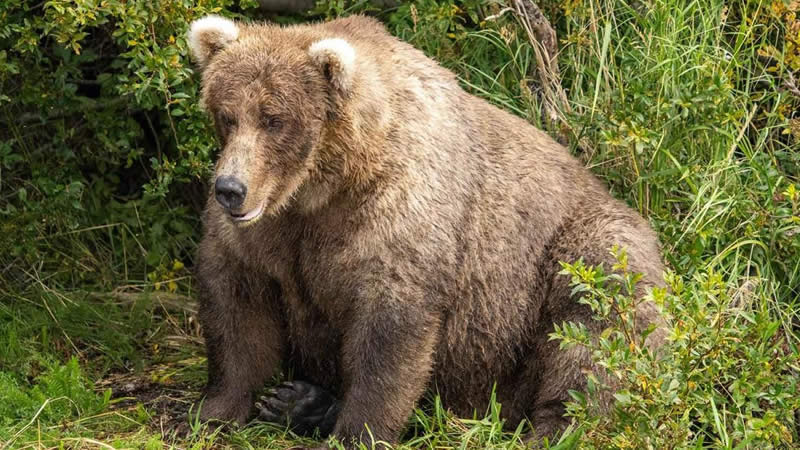 Early this summer, bear lovers gathered online as Explore.org’s wildly popular bear cams at Alaska’s Katmai National Park and Preserve went live. Explore.org is a live nature network. At Brooks River, the salmon run was starting, and lean bears coming out of hibernation were prepared for another season of feasting. To get ready for their upcoming overwintering, the bears put on a lot of weight by autumn each year. After a competitive round of online voting by their devoted internet fans, one bear is named the “Fat Bear Week” champion.

The bear cam viewers celebrated as they recognized familiar floofy faces returning to Brooks Falls, a popular bear fishing spot because of the temporary barrier it provides for migrating salmon. Online discussions were tensely instinctive of 480 Otis, the current 2021 Fat Bear Week champion.

The beloved bear still hadn’t shown up. Otis was first observed at the falls in 2001, and today, the park service estimates that he is between 25 and 27 years old, making him an older brown bear than the species’ average life expectancy of 20 years, though many do live longer. Was Otis’s visit to his favorite fishing spot, which his fans lovingly refer to as his “office?”

When the geriatric favorite finally made his season debut in late June, the excitement on Twitter seemed more akin to a sighting of Justin Bieber than a brown bear: “OTIS HAS ARRIVED,” Explore.org tweeted. “This is not a drill! You may now cry happy tears.” Relief and joy filled the thread replies: “I can’t believe I doubted him. Nothing but respect for the king,” one tweep wrote. “Welcome home, love of my life!!!” replied another. Another said simply: “The bear. The legend.”

The wildly popular Fat Bear Week and the Explore.org bear cams, which celebrate their tenth anniversary this year, have undoubtedly elevated the brown bears of Katmai National Park to celebrity status. Following the publication of the fat bear bracket on Monday, the online bear battle debuted today.

It has garnered attention from national and international media outlets, and it has inspired a line of well-liked merchandise, including calendars, T-shirts, and mugs. The Katmai Conservancy, which collaborates with the multimedia organization Explore.org and Katmai National Park to host the competition, has seen a rise in fundraising thanks to the increased visibility.

According to Charles Annenberg Weingarten, the founder of Explore.org and vice president of the charity organization the Annenberg Foundation, what sets the Katmai bear cams apart is the fact that viewers from all over the world have observed the same bears return to the falls year after year.

At Katmai, viewers can learn each bear’s story over the course of multiple seasons and observe their personality quirks, unlike other nature camera subjects where viewers might not be familiar with any one particular animal, he claims. We have grown to love them, according to Annenberg Weingarten, like we do with our pets.

“Every year the fans return to Katmai virtually, and it’s like they’re seeing these long lost relatives return, and it fills their hearts with joy,” Annenberg Weingarten says.

“It’s a remarkable thing—we are tucked away in a corner of Alaska, and the fact of the matter is a lot of folks are able to enjoy a special place like the Brooks area of the park entirely due to our ability to project imagery over the span of an entire season,” says Sturm.