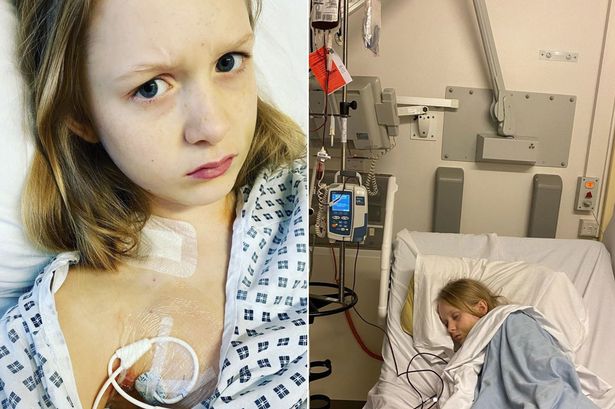 A little girl suffering from a rare and deadly disease faces a race against time to find a bone marrow donor for a life-saving transplant.

Friends and family of Libby Cotts say her situation is on a “knife-edge” as her condition continues to worsen.

The 12-year-old has severe aplastic anaemia, which means her bone marrow does not produce enough blood cells.

She has been receiving blood and platelet transfusions to keep her alive since her diagnosis in October – which are becoming increasingly regular.

Those close to Libby, from Buckhurst Hill, Essex, say she now “doesn’t have much longer left” – and believe Covid may have added to the struggles to find a donor.

Her GoFundMe page is raising money for test kits to find a bone marrow donor and has received thousands of donations – and has also been shared by celebrities including Ronnie O’Sullivan and Lord Sugar.

But the only cure for Libby’s condition is a transplant, a procedure a dozen close family friends are desperately trying to help make happen.

Lucy Tant, 38, is one of the people connected to the campaign.

She said: “She doesn’t have much longer left… we’re on a knife-edge now.

“They haven’t given Gemma, Libby’s mum, a time-frame because she hasn’t pushed for it.

“But yesterday was the big wake-up call that we were all in denial… Libby got a very bad headache and was up all night with her gums bleeding, she’s got blood blisters in her mouth. She’s now back in hospital.”

Libby’s condition means she is prone to severe bruising and bleeding – she was diagnosed after being struck by a hockey ball last year – and her immune system is compromised.

Her family said on Tuesday evening that doctors are concerned the repeated blood transfusions could cause damage to her heart and liver.

The only cure for aplastic anaemia is a transplant, but this requires finding a compatible donor.

A donor was previously found for Libby and on December 21 she was admitted to Great Ormond Street Hospital in preparation for a six-week treatment programme – but this fell through when she was told the donor was no longer compatible.

Ms Tant added: “Libby’s amazing, she is so inspirational to all of us – her strength, her character.

“It’s only been the last few days, really, that we’ve kind of seen Libby go downhill and her spirits go.

“As a person, Libby’s adventurous, she’s a little bit crazy, she loves swimming, horse riding, playing hockey at school… we don’t know when or if she can do these things again.”

Libby’s family and friends have created a GoFundMe page which aims to raise £500,000 for blood cancer charity Anthony Nolan, which is helping her to find a compatible donor.

Every £40 translates to one bone marrow testing kit and the family is also encouraging people, particularly those aged 30 and under, to register themselves to be tested.

Libby’s cause has been shared by a number of celebrities, with business mogul Lord Sugar, snooker player Ronnie O’Sullivan and Newcastle United footballer Andy Carroll amongst those issuing pleas on social media.

On Tuesday, a donation of £7,300 was pledged to the cause alongside the message: “From your loving friends from across the Pond!”

Ms Tant said: “We can’t believe the generosity of people… we are just so overwhelmed.

“It’s amazing what people have done to help us… it’s just so sad that we just need so much more.”

Ms Tant added that the pandemic has made Libby’s situation even more difficult, with Anthony Nolan facing a huge deficit in funding due to reduced donations and even disruption to the postal service causing issues with swab tests.

She said: “If Covid wasn’t around this would have been so much easier and Libby wouldn’t be in this position… we would have had a donor by now.”

Coronavirus symptoms: 3 strange body changes to look out for – including Covid tongue