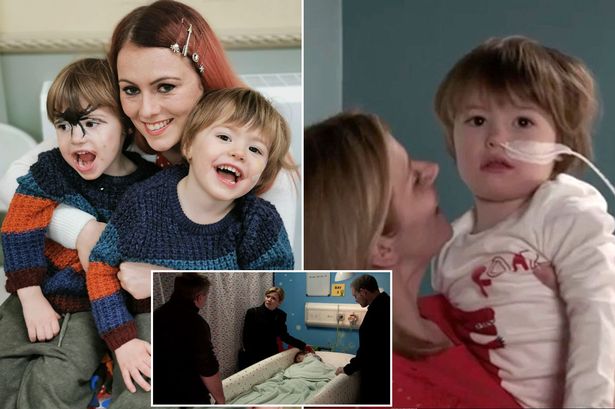 Coronation Street fan Lia Holmes has opened up about the abuse she receives online ahead of her debut on the ITV soap next week,

The mum-of-two will appear on the show playing a nurse looking after Oliver Battersby, who is played by her identical twins Emmanuel and Jeremiah Cheetham.

Oliver, the son of Leanne Battersby and Steve McDonald, will sadly lose his life after his treatment for mitochondrial disease is withdrawn following a heartbreaking battle.

Lia, 35, agreed to take on the role of the nurse who assists Oliver as cast members are not allowed to touch the youngsters in adherence with the coronavirus filming guidelines.

Sadly, social media trolls have lashed out while her own relatives have begged her not to play the part.

“It’s been tough, we have had people on social media saying they would never let their sons play a dying child.

“We had family members who said we were tempting fate,” Lia told The Sun.

Lia, from Rossendale, Lancs, went on to say that bosses on Coronation Street had even offered to have different actors take on the role but this wasn’t necessary as the scenes were played out “sympathetically”.

Speaking about her two boys landing a role on the show, she said: “I once appeared on Take Me Out and I was on Antiques Road Trip, so my mates knew I would be interested.”

Just six weeks later, the family had been contacted by the show after the tots had been successful in landing the role.

Since then, Emmanuel and Jeremiah have been seen in 100 episodes, with their last to air this week.

In order to keep her two children happy on the MediaCity UK based set, Lia admitted that she has had to “bang her head against the wall,” so the youngster would laugh when required.

Lia ensured that Emmanuel took part in Oliver’s final scene after Jeremiah introduced the character to the show.

Trump was sicker from Covid than the public was told at the time, report says